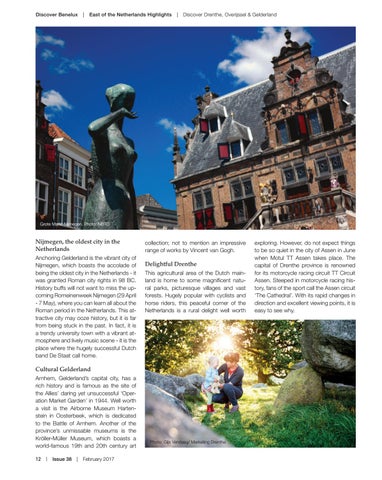 Nijmegen, the oldest city in the Netherlands Anchoring Gelderland is the vibrant city of Nijmegen, which boasts the accolade of being the oldest city in the Netherlands - it was granted Roman city rights in 98 BC. History buffs will not want to miss the upcoming Romeinenweek Nijmegen (29 April - 7 May), where you can learn all about the Roman period in the Netherlands. This attractive city may ooze history, but it is far from being stuck in the past. In fact, it is a trendy university town with a vibrant atmosphere and lively music scene - it is the place where the hugely successful Dutch band De Staat call home.

collection; not to mention an impressive range of works by Vincent van Gogh.

Delightful Drenthe This agricultural area of the Dutch mainland is home to some magnificent natural parks, picturesque villages and vast forests. Hugely popular with cyclists and horse riders, this peaceful corner of the Netherlands is a rural delight well worth

Cultural Gelderland Arnhem, Gelderland’s capital city, has a rich history and is famous as the site of the Allies’ daring yet unsuccessful ‘Operation Market Garden’ in 1944. Well worth a visit is the Airborne Museum Hartenstein in Oosterbeek, which is dedicated to the Battle of Arnhem. Another of the province’s unmissable museums is the Kröller-Müller Museum, which boasts a world-famous 19th and 20th century art 12  |  Issue 38  |  February 2017

exploring. However, do not expect things to be so quiet in the city of Assen in June when Motul TT Assen takes place. The capital of Drenthe province is renowned for its motorcycle racing circuit TT Circuit Assen. Steeped in motorcycle racing history, fans of the sport call the Assen circuit ‘The Cathedral’. With its rapid changes in direction and excellent viewing points, it is easy to see why.