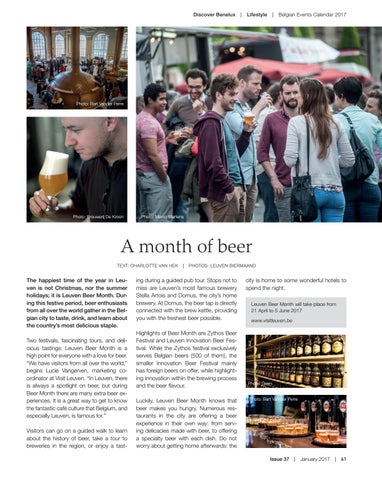 The happiest time of the year in Leuven is not Christmas, nor the summer holidays; it is Leuven Beer Month. During this festive period, beer enthusiasts from all over the world gather in the Belgian city to taste, drink, and learn about the country’s most delicious staple. Two festivals, fascinating tours, and delicious tastings: Leuven Beer Month is a high point for everyone with a love for beer. “We have visitors from all over the world,” begins Lucie Vangerven, marketing coordinator at Visit Leuven. “In Leuven, there is always a spotlight on beer, but during Beer Month there are many extra beer experiences. It is a great way to get to know the fantastic café culture that Belgium, and especially Leuven, is famous for.” Visitors can go on a guided walk to learn about the history of beer, take a tour to breweries in the region, or enjoy a tast-

ing during a guided pub tour. Stops not to miss are Leuven’s most famous brewery Stella Artois and Domus, the city’s home brewery. At Domus, the beer tap is directly connected with the brew kettle, providing you with the freshest beer possible. Highlights of Beer Month are Zythos Beer Festival and Leuven Innovation Beer Festival. While the Zythos festival exclusively serves Belgian beers (500 of them), the smaller Innovation Beer Festival mainly has foreign beers on offer, while highlighting innovation within the brewing process and the beer flavour. Luckily, Leuven Beer Month knows that beer makes you hungry. Numerous restaurants in the city are offering a beer experience in their own way: from serving delicacies made with beer, to offering a specialty beer with each dish. Do not worry about getting home afterwards: the

city is home to some wonderful hotels to spend the night. Leuven Beer Month will take place from 21 April to 5 June 2017 www.visitleuven.be