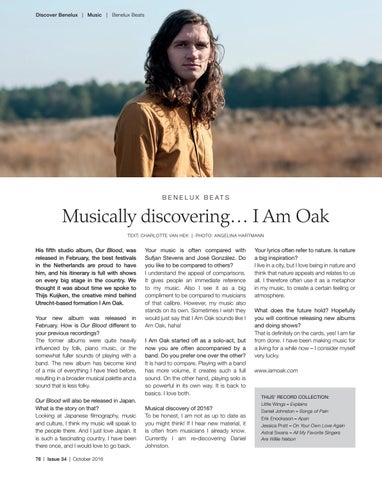 His fifth studio album, Our Blood, was released in February, the best festivals in the Netherlands are proud to have him, and his itinerary is full with shows on every big stage in the country. We thought it was about time we spoke to Thijs Kuijken, the creative mind behind Utrecht-based formation I Am Oak. Your new album was released in February. How is Our Blood different to your previous recordings? The former albums were quite heavily influenced by folk, piano music, or the somewhat fuller sounds of playing with a band. The new album has become kind of a mix of everything I have tried before, resulting in a broader musical palette and a sound that is less folky. Our Blood will also be released in Japan. What is the story on that? Looking at Japanese filmography, music and culture, I think my music will speak to the people there. And I just love Japan. It is such a fascinating country. I have been there once, and I would love to go back. 78 | Issue 34 | October 2016

Your music is often compared with Sufjan Stevens and José González. Do you like to be compared to others? I understand the appeal of comparisons. It gives people an immediate reference to my music. Also I see it as a big compliment to be compared to musicians of that calibre. However, my music also stands on its own. Sometimes I wish they would just say that I Am Oak sounds like I Am Oak, haha! I Am Oak started off as a solo-act, but now you are often accompanied by a band. Do you prefer one over the other? It is hard to compare. Playing with a band has more volume, it creates such a full sound. On the other hand, playing solo is so powerful in its own way. It is back to basics. I love both. Musical discovery of 2016? To be honest, I am not as up to date as you might think! If I hear new material, it is often from musicians I already know. Currently I am re-discovering Daniel Johnston.

Your lyrics often refer to nature. Is nature a big inspiration? I live in a city, but I love being in nature and think that nature appeals and relates to us all. I therefore often use it as a metaphor in my music, to create a certain feeling or atmosphere. What does the future hold? Hopefully you will continue releasing new albums and doing shows? That is definitely on the cards, yes! I am far from done. I have been making music for a living for a while now – I consider myself very lucky. www.iamoak.com