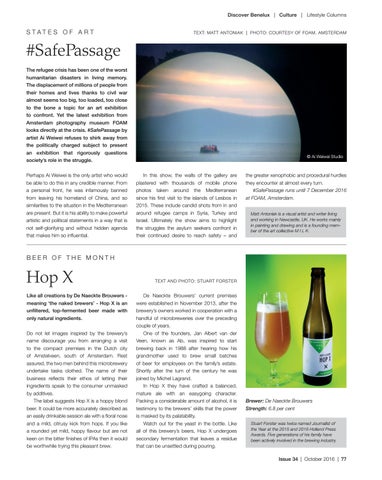 #SafePassage The refugee crisis has been one of the worst humanitarian disasters in living memory. The displacement of millions of people from their homes and lives thanks to civil war almost seems too big, too loaded, too close to the bone a topic for an art exhibition to confront. Yet the latest exhibition from Amsterdam photography museum FOAM looks directly at the crisis. #SafePassage by artist Ai Weiwei refuses to shirk away from the politically charged subject to present an exhibition that rigorously questions society’s role in the struggle. Perhaps Ai Weiwei is the only artist who would be able to do this in any credible manner. From a personal front, he was infamously banned from leaving his homeland of China, and so similarities to the situation in the Mediterranean are present. But it is his ability to make powerful artistic and political statements in a way that is not self-glorifying and without hidden agenda that makes him so influential.

In this show, the walls of the gallery are plastered with thousands of mobile phone photos taken around the Mediterranean since his first visit to the islands of Lesbos in 2015. These include candid shots from in and around refugee camps in Syria, Turkey and Israel. Ultimately the show aims to highlight the struggles the asylum seekers confront in their continued desire to reach safety – and

the greater xenophobic and procedural hurdles they encounter at almost every turn. #SafePassage runs until 7 December 2016 at FOAM, Amsterdam. Matt Antoniak is a visual artist and writer living and working in Newcastle, UK. He works mainly in painting and drawing and is a founding member of the art collective M I L K.

Hop X Like all creations by De Naeckte Brouwers meaning ‘the naked brewers’ - Hop X is an unfiltered, top-fermented beer made with only natural ingredients. Do not let images inspired by the brewery’s name discourage you from arranging a visit to the compact premises in the Dutch city of Amstelveen, south of Amsterdam. Rest assured, the two men behind this microbrewery undertake tasks clothed. The name of their business reflects their ethos of letting their ingredients speak to the consumer unmasked by additives. The label suggests Hop X is a hoppy blond beer. It could be more accurately described as an easily drinkable session ale with a floral nose and a mild, citrusy kick from hops. If you like a rounded yet mild, hoppy flavour but are not keen on the bitter finishes of IPAs then it would be worthwhile trying this pleasant brew.

De Naeckte Brouwers’ current premises were established in November 2013, after the brewery’s owners worked in cooperation with a handful of microbreweries over the preceding couple of years. One of the founders, Jan Albert van der Veen, known as Ab, was inspired to start brewing back in 1988 after hearing how his grandmother used to brew small batches of beer for employees on the family’s estate. Shortly after the turn of the century he was joined by Michel Lagrand. In Hop X they have crafted a balanced, mature ale with an easygoing character. Packing a considerable amount of alcohol, it is testimony to the brewers’ skills that the power is masked by its palatability. Watch out for the yeast in the bottle. Like all of this brewery’s beers, Hop X undergoes secondary fermentation that leaves a residue that can be unsettled during pouring.

Brewer: De Naeckte Brouwers Strength: 6.8 per cent Stuart Forster was twice named Journalist of the Year at the 2015 and 2016 Holland Press Awards. Five generations of his family have been actively involved in the brewing industry.