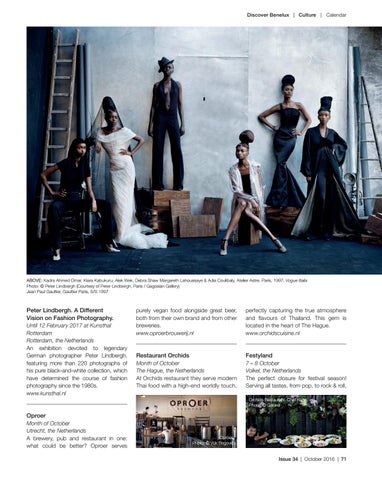 Peter Lindbergh. A Different Vision on Fashion Photography. Until 12 February 2017 at Kunsthal Rotterdam Rotterdam, the Netherlands An exhibition devoted to legendary German photographer Peter Lindbergh, featuring more than 220 photographs of his pure black-and-white collection, which have determined the course of fashion photography since the 1980s. www.kunsthal.nl

purely vegan food alongside great beer, both from their own brand and from other breweries. www.oproerbrouwerij.nl

perfectly capturing the true atmosphere and flavours of Thailand. This gem is located in the heart of The Hague. www.orchidscuisine.nl

Month of October The Hague, the Netherlands At Orchids restaurant they serve modern Thai food with a high-end worldly touch,

Oproer Month of October Utrecht, the Netherlands A brewery, pub and restaurant in one: what could be better? Oproer serves