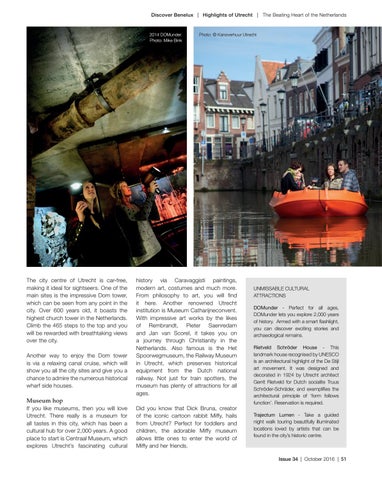 Discover Benelux | Highlights of Utrecht | The Beating Heart of the Netherlands

The city centre of Utrecht is car-free, making it ideal for sightseers. One of the main sites is the impressive Dom tower, which can be seen from any point in the city. Over 600 years old, it boasts the highest church tower in the Netherlands. Climb the 465 steps to the top and you will be rewarded with breathtaking views over the city. Another way to enjoy the Dom tower is via a relaxing canal cruise, which will show you all the city sites and give you a chance to admire the numerous historical wharf side houses.

history via Caravaggisti paintings, modern art, costumes and much more. From philosophy to art, you will find it here. Another renowned Utrecht institution is Museum Catharijneconvent. With impressive art works by the likes of Rembrandt, Pieter Saenredam and Jan van Scorel, it takes you on a journey through Christianity in the Netherlands. Also famous is the Het Spoorwegmuseum, the Railway Museum in Utrecht, which preserves historical equipment from the Dutch national railway. Not just for train spotters, the museum has plenty of attractions for all ages.

Museum hop If you like museums, then you will love Utrecht. There really is a museum for all tastes in this city, which has been a cultural hub for over 2,000 years. A good place to start is Centraal Museum, which explores Utrecht’s fascinating cultural

Did you know that Dick Bruna, creator of the iconic cartoon rabbit Miffy, hails from Utrecht? Perfect for toddlers and children, the adorable Miffy museum allows little ones to enter the world of Miffy and her friends.

UNMISSABLE CULTURAL ATTRACTIONS DOMunder - Perfect for all ages, DOMunder lets you explore 2,000 years of history. Armed with a smart flashlight, you can discover exciting stories and archaeological remains. Rietveld Schröder House - This landmark house recognised by UNESCO is an architectural highlight of the De Stijl art movement. It was designed and decorated in 1924 by Utrecht architect Gerrit Rietveld for Dutch socialite Truus Schröder-Schräder, and exemplifies the architectural principle of ‘form follows function’. Reservation is required. Trajectum Lumen - Take a guided night walk touring beautifully illuminated locations loved by artists that can be found in the city’s historic centre.