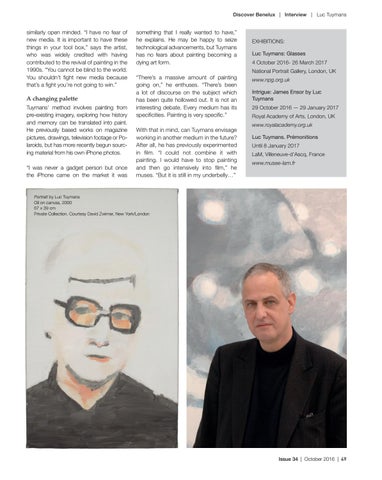 similarly open minded. “I have no fear of new media. It is important to have these things in your tool box,” says the artist, who was widely credited with having contributed to the revival of painting in the 1990s. “You cannot be blind to the world. You shouldn’t fight new media because that’s a fight you’re not going to win.”

A changing palette Tuymans’ method involves painting from pre-existing imagery, exploring how history and memory can be translated into paint. He previously based works on magazine pictures, drawings, television footage or Polaroids, but has more recently begun sourcing material from his own iPhone photos. “I was never a gadget person but once the iPhone came on the market it was

something that I really wanted to have,” he explains. He may be happy to seize technological advancements, but Tuymans has no fears about painting becoming a dying art form. “There’s a massive amount of painting going on,” he enthuses. “There’s been a lot of discourse on the subject which has been quite hollowed out. It is not an interesting debate. Every medium has its specificities. Painting is very specific.” With that in mind, can Tuymans envisage working in another medium in the future? After all, he has previously experimented in film. “I could not combine it with painting. I would have to stop painting and then go intensively into film,” he muses. “But it is still in my underbelly…”