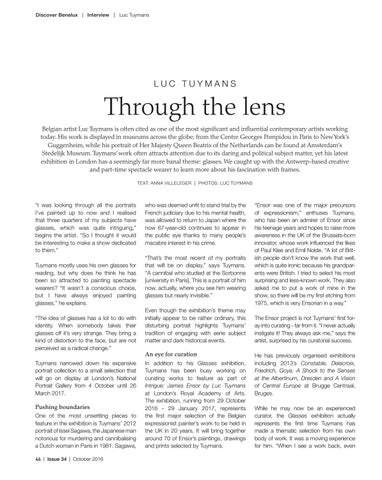 Through the lens Belgian artist Luc Tuymans is often cited as one of the most significant and influential contemporary artists working today. His work is displayed in museums across the globe; from the Centre Georges Pompidou in Paris to New York’s Guggenheim, while his portrait of Her Majesty Queen Beatrix of the Netherlands can be found at Amsterdam’s Stedelijk Museum. Tuymans’ work often attracts attention due to its daring and political subject matter, yet his latest exhibition in London has a seemingly far more banal theme: glasses. We caught up with the Antwerp-based creative and part-time spectacle wearer to learn more about his fascination with frames. TEXT: ANNA VILLELEGER | PHOTOS: LUC TUYMANS

“I was looking through all the portraits I’ve painted up to now and I realised that three quarters of my subjects have glasses, which was quite intriguing,” begins the artist. “So I thought it would be interesting to make a show dedicated to them.” Tuymans mostly uses his own glasses for reading, but why does he think he has been so attracted to painting spectacle wearers? “It wasn’t a conscious choice, but I have always enjoyed painting glasses,” he explains. “The idea of glasses has a lot to do with identity. When somebody takes their glasses off it’s very strange. They bring a kind of distortion to the face, but are not perceived as a radical change.” Tuymans narrowed down his expansive portrait collection to a small selection that will go on display at London’s National Portrait Gallery from 4 October until 26 March 2017.

Pushing boundaries One of the most unsettling pieces to feature in the exhibition is Tuymans’ 2012 portrait of Issei Sagawa, the Japanese man notorious for murdering and cannibalising a Dutch woman in Paris in 1981. Sagawa, 46 | Issue 34 | October 2016

who was deemed unfit to stand trial by the French judiciary due to his mental health, was allowed to return to Japan where the now 67-year-old continues to appear in the public eye thanks to many people’s macabre interest in his crime. “That’s the most recent of my portraits that will be on display,” says Tuymans. “A cannibal who studied at the Sorbonne [university in Paris]. This is a portrait of him now, actually, where you see him wearing glasses but nearly invisible.” Even though the exhibition’s theme may initially appear to be rather ordinary, this disturbing portrait highlights Tuymans’ tradition of engaging with eerie subject matter and dark historical events.

An eye for curation In addition to his Glasses exhibition, Tuymans has been busy working on curating works to feature as part of Intrigue: James Ensor by Luc Tuymans at London’s Royal Academy of Arts. The exhibition, running from 29 October 2016 - 29 January 2017, represents the first major selection of the Belgian expressionist painter’s work to be held in the UK in 20 years. It will bring together around 70 of Ensor’s paintings, drawings and prints selected by Tuymans.

“Ensor was one of the major precursors of expressionism,” enthuses Tuymans, who has been an admirer of Ensor since his teenage years and hopes to raise more awareness in the UK of the Brussels-born innovator, whose work influenced the likes of Paul Klee and Emil Nolde. “A lot of British people don’t know the work that well, which is quite ironic because his grandparents were British. I tried to select his most surprising and less-known work. They also asked me to put a work of mine in the show, so there will be my first etching from 1975, which is very Ensorian in a way.” The Ensor project is not Tuymans’ first foray into curating - far from it. “I never actually instigate it! They always ask me,” says the artist, surprised by his curatorial success. He has previously organised exhibitions including 2013’s Constable, Delacroix, Friedrich, Goya. A Shock to the Senses at the Albertinum, Dresden and A Vision of Central Europe at Brugge Centraal, Bruges. While he may now be an experienced curator, the Glasses exhibition actually represents the first time Tuymans has made a thematic selection from his own body of work. It was a moving experience for him. “When I see a work back, even