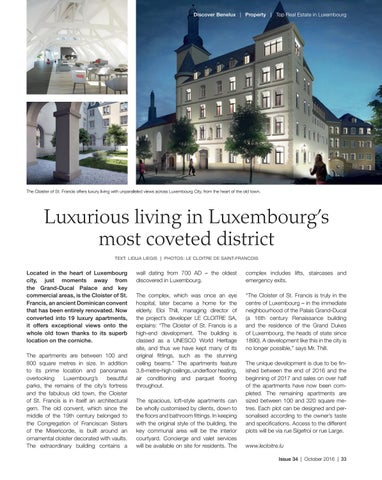 The Cloister of St. Francis offers luxury living with unparalleled views across Luxembourg City, from the heart of the old town.

Located in the heart of Luxembourg city, just moments away from the Grand-Ducal Palace and key commercial areas, is the Cloister of St. Francis, an ancient Dominican convent that has been entirely renovated. Now converted into 19 luxury apartments, it offers exceptional views onto the whole old town thanks to its superb location on the corniche. The apartments are between 100 and 800 square metres in size. In addition to its prime location and panoramas overlooking Luxembourg’s beautiful parks, the remains of the city’s fortress and the fabulous old town, the Cloister of St. Francis is in itself an architectural gem. The old convent, which since the middle of the 19th century belonged to the Congregation of Franciscan Sisters of the Misericorde, is built around an ornamental cloister decorated with vaults. The extraordinary building contains a

wall dating from 700 AD – the oldest discovered in Luxembourg.

The complex, which was once an eye hospital, later became a home for the elderly. Eloi Thill, managing director of the project’s developer LE CLOITRE SA, explains: “The Cloister of St. Francis is a high-end development. The building is classed as a UNESCO World Heritage site, and thus we have kept many of its original fittings, such as the stunning ceiling beams.” The apartments feature 3.8-metre-high ceilings, underfloor heating, air conditioning and parquet flooring throughout.

“The Cloister of St. Francis is truly in the centre of Luxembourg – in the immediate neighbourhood of the Palais Grand-Ducal (a 16th century Renaissance building and the residence of the Grand Dukes of Luxembourg, the heads of state since 1890). A development like this in the city is no longer possible,” says Mr. Thill.

The spacious, loft-style apartments can be wholly customised by clients, down to the floors and bathroom fittings. In keeping with the original style of the building, the key communal area will be the interior courtyard. Concierge and valet services will be available on site for residents. The

The unique development is due to be finished between the end of 2016 and the beginning of 2017 and sales on over half of the apartments have now been completed. The remaining apartments are sized between 100 and 320 square metres. Each plot can be designed and personalised according to the owner’s taste and specifications. Access to the different plots will be via rue Sigefroi or rue Large. www.lecloitre.lu Issue 34 | October 2016 | 33