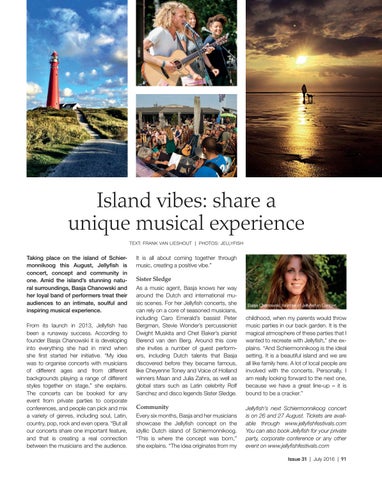 Taking place on the island of Schiermonnikoog this August, Jellyfish is concert, concept and community in one. Amid the island’s stunning natural surroundings, Basja Chanowski and her loyal band of performers treat their audiences to an intimate, soulful and inspiring musical experience. From its launch in 2013, Jellyfish has been a runaway success. According to founder Basja Chanowski it is developing into everything she had in mind when she first started her initiative. “My idea was to organise concerts with musicians of different ages and from different backgrounds playing a range of different styles together on stage,” she explains. The concerts can be booked for any event from private parties to corporate conferences, and people can pick and mix a variety of genres, including soul, Latin, country, pop, rock and even opera. “But all our concerts share one important feature, and that is creating a real connection between the musicians and the audience.

It is all about coming together through music, creating a positive vibe.”

Sister Sledge As a music agent, Basja knows her way around the Dutch and international music scenes. For her Jellyfish concerts, she can rely on a core of seasoned musicians, including Caro Emerald’s bassist Peter Bergman, Stevie Wonder’s percussionist Dwight Muskita and Chet Baker’s pianist Berend van den Berg. Around this core she invites a number of guest performers, including Dutch talents that Basja discovered before they became famous, like Cheyenne Toney and Voice of Holland winners Maan and Julia Zahra, as well as global stars such as Latin celebrity Rolf Sanchez and disco legends Sister Sledge.

Community Every six months, Basja and her musicians showcase the Jellyfish concept on the idyllic Dutch island of Schiermonnikoog. “This is where the concept was born,” she explains. “The idea originates from my

childhood, when my parents would throw music parties in our back garden. It is the magical atmosphere of these parties that I wanted to recreate with Jellyfish,” she explains. “And Schiermonnikoog is the ideal setting. It is a beautiful island and we are all like family here. A lot of local people are involved with the concerts. Personally, I am really looking forward to the next one, because we have a great line-up – it is bound to be a cracker.” Jellyfish’s next Schiermonnikoog concert is on 26 and 27 August. Tickets are available through www.jellyfishfestivals.com You can also book Jellyfish for your private party, corporate conference or any other event on www.jellyfishfestivals.com Issue 31 | July 2016 | 91