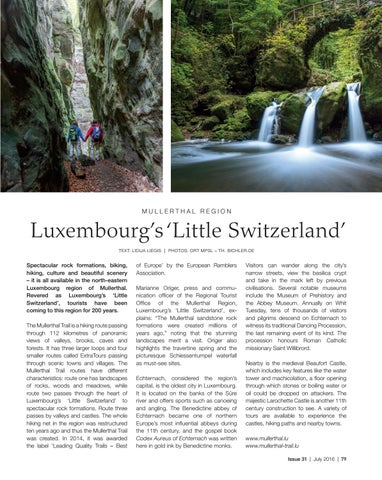 Spectacular rock formations, biking, hiking, culture and beautiful scenery – it is all available in the north-eastern Luxembourg region of Mullerthal. Revered as Luxembourg’s ‘Little Switzerland’, tourists have been coming to this region for 200 years. The Mullerthal Trail is a hiking route passing through 112 kilometres of panoramic views of valleys, brooks, caves and forests. It has three larger loops and four smaller routes called ExtraTours passing through scenic towns and villages. The Mullerthal Trail routes have different characteristics: route one has landscapes of rocks, woods and meadows, while route two passes through the heart of Luxembourg’s ‘Little Switzerland’ to spectacular rock formations. Route three passes by valleys and castles. The whole hiking net in the region was restructured ten years ago and thus the Mullerthal Trail was created. In 2014, it was awarded the label ‘Leading Quality Trails – Best

of Europe’ by the European Ramblers Association. Marianne Origer, press and communication officer of the Regional Tourist Office of the Mullerthal Region, Luxembourg’s ‘Little Switzerland’, explains: “The Mullerthal sandstone rock formations were created millions of years ago,” noting that the stunning landscapes merit a visit. Origer also highlights the travertine spring and the picturesque Schiessentumpel waterfall as must-see sites. Echternach, considered the region’s capital, is the oldest city in Luxembourg. It is located on the banks of the Sûre river and offers sports such as canoeing and angling. The Benedictine abbey of Echternach became one of northern Europe’s most influential abbeys during the 11th century, and the gospel book Codex Aureus of Echternach was written here in gold ink by Benedictine monks.

Visitors can wander along the city’s narrow streets, view the basilica crypt and take in the mark left by previous civilisations. Several notable museums include the Museum of Prehistory and the Abbey Museum. Annually on Whit Tuesday, tens of thousands of visitors and pilgrims descend on Echternach to witness its traditional Dancing Procession, the last remaining event of its kind. The procession honours Roman Catholic missionary Saint Willibrord. Nearby is the medieval Beaufort Castle, which includes key features like the water tower and machicolation, a floor opening through which stones or boiling water or oil could be dropped on attackers. The majestic Larochette Castle is another 11th century construction to see. A variety of tours are available to experience the castles, hiking paths and nearby towns. www.mullerthal.lu www.mullerthal-trail.lu Issue 31 | July 2016 | 79