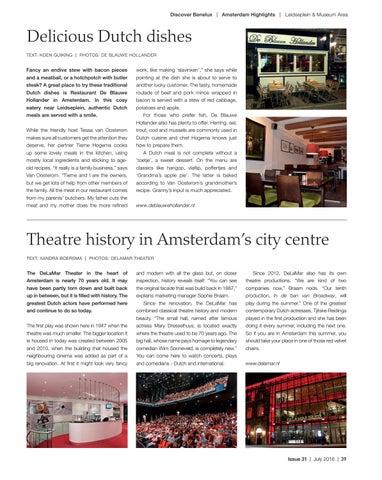 Fancy an endive stew with bacon pieces and a meatball, or a hotchpotch with butler steak? A great place to try these traditional Dutch dishes is Restaurant De Blauwe Hollander in Amsterdam. In this cosy eatery near Leidseplein, authentic Dutch meals are served with a smile. While the friendly host Tessa van Oosterom makes sure all customers get the attention they deserve, her partner Tieme Hogema cooks up some lovely meals in the kitchen, using mostly local ingredients and sticking to ageold recipes. “It really is a family business,” says Van Oosterom. “Tieme and I are the owners, but we get lots of help from other members of the family. All the meat in our restaurant comes from my parents’ butchers. My father cuts the meat and my mother does the more refined

work, like making ‘slavinken’,” she says while pointing at the dish she is about to serve to another lucky customer. The tasty, homemade roulade of beef and pork mince wrapped in bacon is served with a stew of red cabbage, potatoes and apple. For those who prefer fish, De Blauwe Hollander also has plenty to offer. Herring, eel, trout, cod and mussels are commonly used in Dutch cuisine and chef Hogema knows just how to prepare them. A Dutch meal is not complete without a ‘toetje’, a sweet dessert. On the menu are classics like hangop, vlaflip, poffertjes and ‘Grandma’s apple pie’. The latter is baked according to Van Oosterom’s grandmother’s recipe. Granny’s input is much appreciated. www.deblauwehollander.nl

The DeLaMar Theater in the heart of Amsterdam is nearly 70 years old. It may have been partly torn down and built back up in between, but it is filled with history. The greatest Dutch actors have performed here and continue to do so today. The first play was shown here in 1947 when the theatre was much smaller. The bigger location it is housed in today was created between 2005 and 2010, when the building that housed the neighbouring cinema was added as part of a big renovation. At first it might look very fancy

and modern with all the glass but, on closer inspection, history reveals itself: “You can see the original facade that was build back in 1887,” explains marketing manager Sophie Braam. Since the renovation, the DeLaMar has combined classical theatre history and modern beauty. “The small hall, named after famous actress Mary Dresselhuys, is located exactly where the theatre used to be 70 years ago. The big hall, whose name pays homage to legendary comedian Wim Sonneveld, is completely new.” You can come here to watch concerts, plays and comedians - Dutch and international.

Since 2012, DeLaMar also has its own theatre productions. “We are kind of two companies now,” Braam nods. “Our tenth production, In de ban van Broadway, will play during the summer.” One of the greatest contemporary Dutch actresses, Tjitske Reidinga played in the first production and she has been doing it every summer, including the next one. So if you are in Amsterdam this summer, you should take your place in one of those red velvet chairs. www.delamar.nl