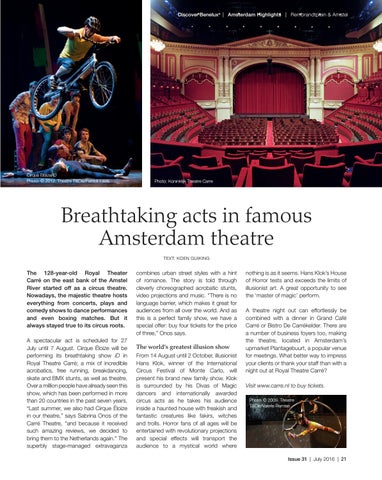 The 128-year-old Royal Theater Carré on the east bank of the Amstel River started off as a circus theatre. Nowadays, the majestic theatre hosts everything from concerts, plays and comedy shows to dance performances and even boxing matches. But it always stayed true to its circus roots. A spectacular act is scheduled for 27 July until 7 August. Cirque Éloize will be performing its breathtaking show iD in Royal Theatre Carré; a mix of incredible acrobatics, free running, breakdancing, skate and BMX stunts, as well as theatre. Over a million people have already seen this show, which has been performed in more than 20 countries in the past seven years. “Last summer, we also had Cirque Éloize in our theatre,” says Sabrina Onos of the Carré Theatre, “and because it received such amazing reviews, we decided to bring them to the Netherlands again.” The superbly stage-managed extravaganza

combines urban street styles with a hint of romance. The story is told through cleverly choreographed acrobatic stunts, video projections and music. “There is no language barrier, which makes it great for audiences from all over the world. And as this is a perfect family show, we have a special offer: buy four tickets for the price of three,” Onos says.

The world’s greatest illusion show From 14 August until 2 October, illusionist Hans Klok, winner of the International Circus Festival of Monte Carlo, will present his brand new family show. Klok is surrounded by his Divas of Magic dancers and internationally awarded circus acts as he takes his audience inside a haunted house with freakish and fantastic creatures like fakirs, witches and trolls. Horror fans of all ages will be entertained with revolutionary projections and special effects will transport the audience to a mystical world where

nothing is as it seems. Hans Klok’s House of Horror tests and exceeds the limits of illusionist art. A great opportunity to see the ‘master of magic’ perform. A theatre night out can effortlessly be combined with a dinner in Grand Café Carré or Bistro De Carrékelder. There are a number of business foyers too, making the theatre, located in Amsterdam’s upmarket Plantagebuurt, a popular venue for meetings. What better way to impress your clients or thank your staff than with a night out at Royal Theatre Carré? Visit www.carre.nl to buy tickets. Photo: © 2009. Theatre T&amp;Cie/Valerie Remise