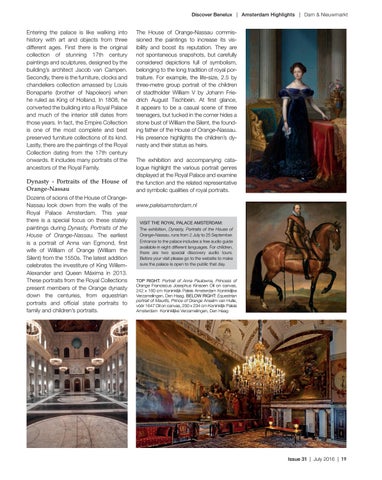 Entering the palace is like walking into history with art and objects from three different ages. First there is the original collection of stunning 17th century paintings and sculptures, designed by the building’s architect Jacob van Campen. Secondly, there is the furniture, clocks and chandeliers collection amassed by Louis Bonaparte (brother of Napoleon) when he ruled as King of Holland. In 1808, he converted the building into a Royal Palace and much of the interior still dates from those years. In fact, the Empire Collection is one of the most complete and best preserved furniture collections of its kind. Lastly, there are the paintings of the Royal Collection dating from the 17th century onwards. It includes many portraits of the ancestors of the Royal Family.

The House of Orange-Nassau commissioned the paintings to increase its visibility and boost its reputation. They are not spontaneous snapshots, but carefully considered depictions full of symbolism, belonging to the long tradition of royal portraiture. For example, the life-size, 2.5 by three-metre group portrait of the children of stadtholder William V by Johann Friedrich August Tischbein. At first glance, it appears to be a casual scene of three teenagers, but tucked in the corner hides a stone bust of William the Silent, the founding father of the House of Orange-Nassau. His presence highlights the children’s dynasty and their status as heirs. The exhibition and accompanying catalogue highlight the various portrait genres displayed at the Royal Palace and examine the function and the related representative and symbolic qualities of royal portraits. www.paleisamsterdam.nl VISIT THE ROYAL PALACE AMSTERDAM: The exhibition, Dynasty, Portraits of the House of Orange-Nassau, runs from 2 July to 25 September. Entrance to the palace includes a free audio guide available in eight different languages. For children, there are two special discovery audio tours. Before your visit please go to the website to make sure the palace is open to the public that day.