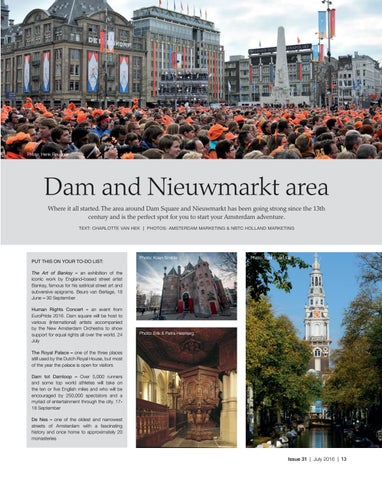 Dam and Nieuwmarkt area Where it all started. The area around Dam Square and Nieuwmarkt has been going strong since the 13th century and is the perfect spot for you to start your Amsterdam adventure. TEXT: CHARLOTTE VAN HEK | PHOTOS: AMSTERDAM MARKETING &amp; NBTC HOLLAND MARKETING

The Art of Banksy – an exhibition of the iconic work by England-based street artist Banksy, famous for his satirical street art and subversive epigrams. Beurs van Berlage, 18 June – 30 September Human Rights Concert – an event from EuroPride 2016. Dam square will be host to various (international) artists accompanied by the New Amsterdam Orchestra to show support for equal rights all over the world. 24 July

The Royal Palace – one of the three places still used by the Dutch Royal House, but most of the year the palace is open for visitors Dam tot Damloop – Over 5,000 runners and some top world athletes will take on the ten or five English miles and who will be encouraged by 250,000 spectators and a myriad of entertainment through the city. 1718 September De Nes – one of the oldest and narrowest streets of Amsterdam with a fascinating history and once home to approximately 20 monasteries