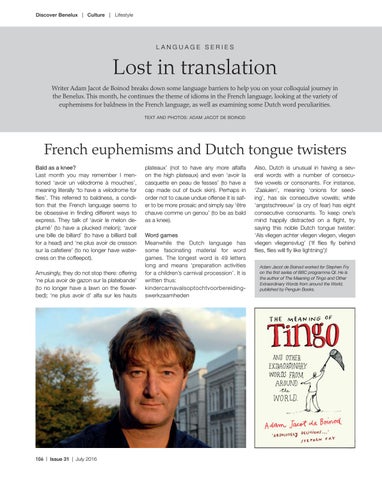 Lost in translation Writer Adam Jacot de Boinod breaks down some language barriers to help you on your colloquial journey in the Benelux. This month, he continues the theme of idioms in the French language, looking at the variety of euphemisms for baldness in the French language, as well as examining some Dutch word peculiarities. TEXT AND PHOTOS: ADAM JACOT DE BOINOD

French euphemisms and Dutch tongue twisters Bald as a knee? Last month you may remember I mentioned ‘avoir un vélodrome à mouches’, meaning literally ‘to have a velodrome for flies’. This referred to baldness, a condition that the French language seems to be obsessive in finding different ways to express. They talk of ‘avoir le melon deplumé’ (to have a plucked melon); ‘avoir une bille de billard’ (to have a billiard ball for a head) and ‘ne plus avoir de cresson sur la cafetiere’ (to no longer have watercress on the coffeepot). Amusingly, they do not stop there: offering ‘ne plus avoir de gazon sur la platebande’ (to no longer have a lawn on the flowerbed); ‘ne plus avoir d’ alfa sur les hauts

plateaux’ (not to have any more alfalfa on the high plateaux) and even ‘avoir la casquette en peau de fesses’ (to have a cap made out of buck skin). Perhaps in order not to cause undue offense it is safer to be more prosaic and simply say ‘être chauve comme un genou’ (to be as bald as a knee). Word games Meanwhile the Dutch language has some fascinating material for word games. The longest word is 49 letters long and means ‘preparation activities for a children’s carnival procession’. It is written thus: kindercarnavalsoptochtvoorbereidingswerkzaamheden

Also, Dutch is unusual in having a several words with a number of consecutive vowels or consonants. For instance, ‘Zaaiuien’, meaning ‘onions for seeding’, has six consecutive vowels; while ‘angstschreeuw’ (a cry of fear) has eight consecutive consonants. To keep one’s mind happily distracted on a flight, try saying this noble Dutch tongue twister: ‘Als vliegen achter vliegen vliegen, vliegen vliegen vliegensvlug’ (‘If flies fly behind flies, flies will fly like lightning’)! Adam Jacot de Boinod worked for Stephen Fry on the first series of BBC programme QI. He is the author of The Meaning of Tingo and Other Extraordinary Words from around the World, published by Penguin Books.