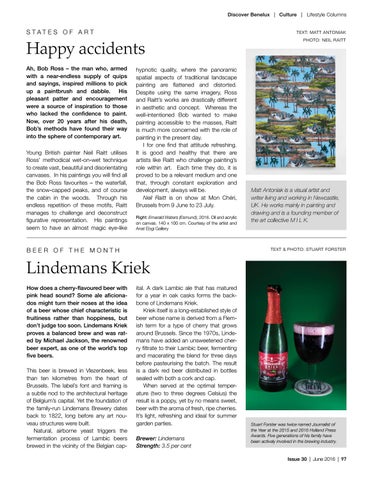 Happy accidents Ah, Bob Ross – the man who, armed with a near-endless supply of quips and sayings, inspired millions to pick up a paintbrush and dabble. His pleasant patter and encouragement were a source of inspiration to those who lacked the confidence to paint. Now, over 20 years after his death, Bob’s methods have found their way into the sphere of contemporary art. Young British painter Neil Raitt utilises Ross’ methodical wet-on-wet technique to create vast, beautiful and disorientating canvases. In his paintings you will find all the Bob Ross favourites – the waterfall, the snow-capped peaks, and of course the cabin in the woods. Through his endless repetition of these motifs, Raitt manages to challenge and deconstruct figurative representation. His paintings seem to have an almost magic eye-like

hypnotic quality, where the panoramic spatial aspects of traditional landscape painting are flattened and distorted. Despite using the same imagery, Ross and Raitt’s works are drastically different in aesthetic and concept. Whereas the well-intentioned Bob wanted to make painting accessible to the masses, Raitt is much more concerned with the role of painting in the present day. I for one find that attitude refreshing. It is good and healthy that there are artists like Raitt who challenge painting’s role within art. Each time they do, it is proved to be a relevant medium and one that, through constant exploration and development, always will be. Neil Raitt is on show at Mon Chéri, Brussels from 9 June to 23 July. Right: Emerald Waters (Esmund), 2016. Oil and acrylic on canvas. 140 x 100 cm. Courtesy of the artist and Anat Ebgi Gallery

Lindemans Kriek How does a cherry-flavoured beer with pink head sound? Some ale aficionados might turn their noses at the idea of a beer whose chief characteristic is fruitiness rather than hoppiness, but don’t judge too soon. Lindemans Kriek proves a balanced brew and was rated by Michael Jackson, the renowned beer expert, as one of the world’s top five beers. This beer is brewed in Vlezenbeek, less than ten kilometres from the heart of Brussels. The label’s font and framing is a subtle nod to the architectural heritage of Belgium’s capital. Yet the foundation of the family-run Lindemans Brewery dates back to 1822, long before any art nouveau structures were built. Natural, airborne yeast triggers the fermentation process of Lambic beers brewed in the vicinity of the Belgian cap-

ital. A dark Lambic ale that has matured for a year in oak casks forms the backbone of Lindemans Kriek. Kriek itself is a long-established style of beer whose name is derived from a Flemish term for a type of cherry that grows around Brussels. Since the 1970s, Lindemans have added an unsweetened cherry filtrate to their Lambic beer, fermenting and macerating the blend for three days before pasteurising the batch. The result is a dark red beer distributed in bottles sealed with both a cork and cap. When served at the optimal temperature (two to three degrees Celsius) the result is a poppy, yet by no means sweet, beer with the aroma of fresh, ripe cherries. It’s light, refreshing and ideal for summer garden parties. Brewer: Lindemans Strength: 3.5 per cent