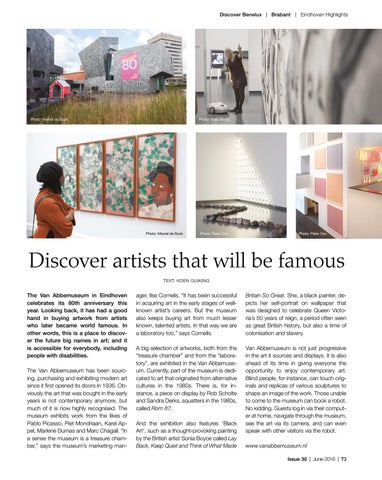 Discover artists that will be famous TEXT: KOEN GUIKING

The Van Abbemuseum in Eindhoven celebrates its 80th anniversary this year. Looking back, it has had a good hand in buying artwork from artists who later became world famous. In other words, this is a place to discover the future big names in art; and it is accessible for everybody, including people with disabilities. The Van Abbemuseum has been sourcing, purchasing and exhibiting modern art since it first opened its doors in 1936. Obviously the art that was bought in the early years is not contemporary anymore, but much of it is now highly recognised. The museum exhibits work from the likes of Pablo Picasso, Piet Mondriaan, Karel Appel, Marlene Dumas and Marc Chagall. “In a sense the museum is a treasure chamber,” says the museum’s marketing man-

ager, Ilse Cornelis. “It has been successful in acquiring art in the early stages of wellknown artist’s careers. But the museum also keeps buying art from much lesser known, talented artists. In that way we are a laboratory too,” says Cornelis.

Britain So Great. She, a black painter, depicts her self-portrait on wallpaper that was designed to celebrate Queen Victoria’s 50 years of reign, a period often seen as great British history, but also a time of colonisation and slavery.

A big selection of artworks, both from the “treasure chamber” and from the “laboratory”, are exhibited in the Van Abbemuseum. Currently, part of the museum is dedicated to art that originated from alternative cultures in the 1980s. There is, for instance, a piece on display by Rob Scholte and Sandra Derks, squatters in the 1980s, called Rom 87.

Van Abbemuseum is not just progressive in the art it sources and displays. It is also ahead of its time in giving everyone the opportunity to enjoy contemporary art. Blind people, for instance, can touch originals and replicas of various sculptures to shape an image of the work. Those unable to come to the museum can book a robot. No kidding. Guests log in via their computer at home, navigate through the museum, see the art via its camera, and can even speak with other visitors via the robot.

And the exhibition also features ‘Black Art’, such as a thought-provoking painting by the British artist Sonia Boyce called Lay Back, Keep Quiet and Think of What Made