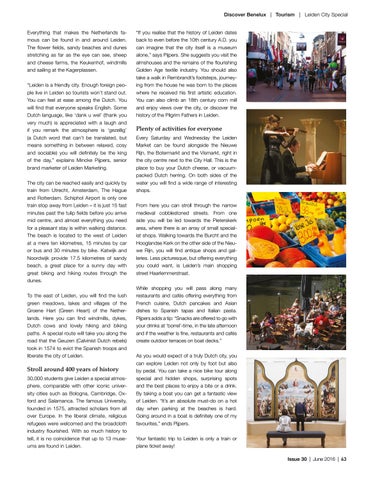 Discover Benelux | Tourism | Leiden City Special Everything that makes the Netherlands famous can be found in and around Leiden. The flower fields, sandy beaches and dunes stretching as far as the eye can see, sheep and cheese farms, the Keukenhof, windmills and sailing at the Kagerplassen. “Leiden is a friendly city. Enough foreign people live in Leiden so tourists won’t stand out. You can feel at ease among the Dutch. You will find that everyone speaks English. Some Dutch language, like ‘dank u wel’ (thank you very much) is appreciated with a laugh and if you remark the atmosphere is ‘gezellig’ (a Dutch word that can’t be translated, but means something in between relaxed, cosy and sociable) you will definitely be the king of the day,” explains Mincke Pijpers, senior brand marketer of Leiden Marketing. The city can be reached easily and quickly by train from Utrecht, Amsterdam, The Hague and Rotterdam. Schiphol Airport is only one train stop away from Leiden – it is just 15 fast minutes past the tulip fields before you arrive mid centre, and almost everything you need for a pleasant stay is within walking distance. The beach is located to the west of Leiden at a mere ten kilometres, 15 minutes by car or bus and 30 minutes by bike. Katwijk and Noordwijk provide 17.5 kilometres of sandy beach, a great place for a sunny day with great biking and hiking routes through the dunes. To the east of Leiden, you will find the lush green meadows, lakes and villages of the Groene Hart (Green Heart) of the Netherlands. Here you can find windmills, dykes, Dutch cows and lovely hiking and biking paths. A special route will take you along the road that the Geuzen (Calvinist Dutch rebels) took in 1574 to evict the Spanish troops and liberate the city of Leiden.

Stroll around 400 years of history 30,000 students give Leiden a special atmosphere, comparable with other iconic university cities such as Bologna, Cambridge, Oxford and Salamanca. The famous University, founded in 1575, attracted scholars from all over Europe. In the liberal climate, religious refugees were welcomed and the broadcloth industry flourished. With so much history to tell, it is no coincidence that up to 13 museums are found in Leiden.

“If you realise that the history of Leiden dates back to even before the 10th century A.D. you can imagine that the city itself is a museum alone,” says Pijpers. She suggests you visit the almshouses and the remains of the flourishing Golden Age textile industry. You should also take a walk in Rembrandt’s footsteps, journeying from the house he was born to the places where he received his first artistic education. You can also climb an 18th century corn mill and enjoy views over the city, or discover the history of the Pilgrim Fathers in Leiden.

Plenty of activities for everyone Every Saturday and Wednesday the Leiden Market can be found alongside the Nieuwe Rijn, the Botermarkt and the Vismarkt, right in the city centre next to the City Hall. This is the place to buy your Dutch cheese, or vacuumpacked Dutch herring. On both sides of the water you will find a wide range of interesting shops. From here you can stroll through the narrow medieval cobblestoned streets. From one side you will be led towards the Pieterskerk area, where there is an array of small specialist shops. Walking towards the Burcht and the Hooglandse Kerk on the other side of the Nieuwe Rijn, you will find antique shops and galleries. Less picturesque, but offering everything you could want, is Leiden’s main shopping street Haarlemmerstraat. While shopping you will pass along many restaurants and cafés offering everything from French cuisine, Dutch pancakes and Asian dishes to Spanish tapas and Italian pasta. Pijpers adds a tip: “Snacks are offered to go with your drinks at ‘borrel’-time, in the late afternoon and if the weather is fine, restaurants and cafés create outdoor terraces on boat decks.” As you would expect of a truly Dutch city, you can explore Leiden not only by foot but also by pedal. You can take a nice bike tour along special and hidden shops, surprising spots and the best places to enjoy a bite or a drink. By taking a boat you can get a fantastic view of Leiden. “It’s an absolute must-do on a hot day when parking at the beaches is hard. Going around in a boat is definitely one of my favourites,” ends Pijpers. Your fantastic trip to Leiden is only a train or plane ticket away! Issue 30 | June 2016 | 63