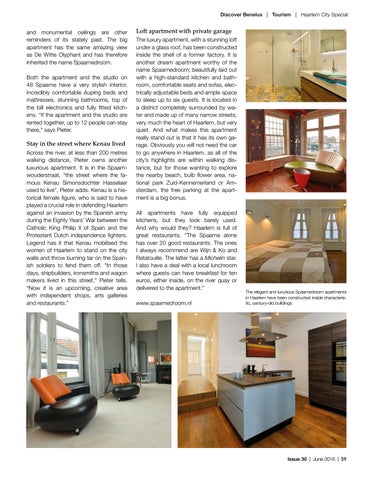 and monumental ceilings are other reminders of its stately past. The big apartment has the same amazing view as De Witte Olyphant and has therefore inherited the name Spaarnedroom. Both the apartment and the studio on 48 Spaarne have a very stylish interior, incredibly comfortable Auping beds and mattresses, stunning bathrooms, top of the bill electronics and fully fitted kitchens. “If the apartment and the studio are rented together, up to 12 people can stay there,” says Pieter.

Stay in the street where Kenau lived Across the river, at less than 200 metres walking distance, Pieter owns another luxurious apartment. It is in the Spaarnwouderstraat, “the street where the famous Kenau Simonsdochter Hasselaer used to live”, Pieter adds. Kenau is a historical female figure, who is said to have played a crucial role in defending Haarlem against an invasion by the Spanish army during the Eighty Years’ War between the Catholic King Philip II of Spain and the Protestant Dutch independence fighters. Legend has it that Kenau mobilised the women of Haarlem to stand on the city walls and throw burning tar on the Spanish soldiers to fend them off. “In those days, shipbuilders, ironsmiths and wagon makers lived in this street,” Pieter tells. “Now it is an upcoming, creative area with independent shops, arts galleries and restaurants.”

Loft apartment with private garage The luxury apartment, with a stunning loft under a glass roof, has been constructed inside the shell of a former factory. It is another dream apartment worthy of the name Spaarnedroom; beautifully laid out with a high-standard kitchen and bathroom, comfortable seats and sofas, electrically adjustable beds and ample space to sleep up to six guests. It is located in a district completely surrounded by water and made up of many narrow streets; very much the heart of Haarlem, but very quiet. And what makes this apartment really stand out is that it has its own garage. Obviously you will not need the car to go anywhere in Haarlem, as all of the city’s highlights are within walking distance, but for those wanting to explore the nearby beach, bulb flower area, national park Zuid-Kennemerland or Amsterdam, the free parking at the apartment is a big bonus. All apartments have fully equipped kitchens, but they look barely used. And why would they? Haarlem is full of great restaurants. “The Spaarne alone has over 20 good restaurants. The ones I always recommend are Wijn &amp; Ko and Ratatouille. The latter has a Michelin star. I also have a deal with a local lunchroom where guests can have breakfast for ten euros, either inside, on the river quay or delivered to the apartment.” www.spaarnedroom.nl

The elegant and luxurious Spaarnedroom apartments in Haarlem have been constructed inside characteristic, century-old buildings.