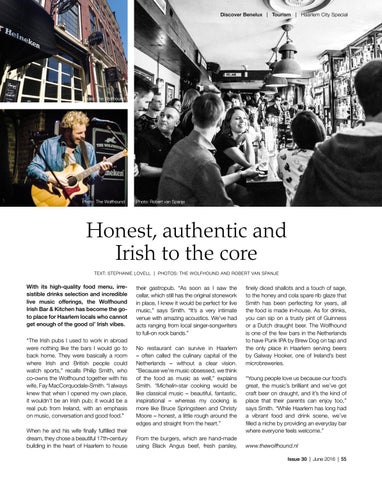 With its high-quality food menu, irresistible drinks selection and incredible live music offerings, the Wolfhound Irish Bar &amp; Kitchen has become the goto place for Haarlem locals who cannot get enough of the good ol’ Irish vibes. “The Irish pubs I used to work in abroad were nothing like the bars I would go to back home. They were basically a room where Irish and British people could watch sports,” recalls Philip Smith, who co-owns the Wolfhound together with his wife, Fay MacCorquodale-Smith. “I always knew that when I opened my own place, it wouldn’t be an Irish pub; it would be a real pub from Ireland, with an emphasis on music, conversation and good food.” When he and his wife finally fulfilled their dream, they chose a beautiful 17th-century building in the heart of Haarlem to house

their gastropub. “As soon as I saw the cellar, which still has the original stonework in place, I knew it would be perfect for live music,” says Smith. “It’s a very intimate venue with amazing acoustics. We’ve had acts ranging from local singer-songwriters to full-on rock bands.” No restaurant can survive in Haarlem – often called the culinary capital of the Netherlands – without a clear vision. “Because we’re music obsessed, we think of the food as music as well,” explains Smith. “Michelin-star cooking would be like classical music – beautiful, fantastic, inspirational – whereas my cooking is more like Bruce Springsteen and Christy Moore – honest, a little rough around the edges and straight from the heart.” From the burgers, which are hand-made using Black Angus beef, fresh parsley,

finely diced shallots and a touch of sage, to the honey and cola spare rib glaze that Smith has been perfecting for years, all the food is made in-house. As for drinks, you can sip on a trusty pint of Guinness or a Dutch draught beer. The Wolfhound is one of the few bars in the Netherlands to have Punk IPA by Brew Dog on tap and the only place in Haarlem serving beers by Galway Hooker, one of Ireland’s best microbreweries. “Young people love us because our food’s great, the music’s brilliant and we’ve got craft beer on draught, and it’s the kind of place that their parents can enjoy too,” says Smith. “While Haarlem has long had a vibrant food and drink scene, we’ve filled a niche by providing an everyday bar where everyone feels welcome.” www.thewolfhound.nl Issue 30 | June 2016 | 55