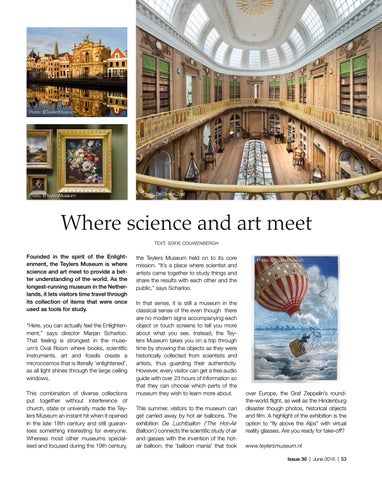 Founded in the spirit of the Enlightenment, the Teylers Museum is where science and art meet to provide a better understanding of the world. As the longest-running museum in the Netherlands, it lets visitors time travel through its collection of items that were once used as tools for study. “Here, you can actually feel the Enlightenment,” says director Marjan Scharloo. That feeling is strongest in the museum’s Oval Room where books, scientific instruments, art and fossils create a microcosmos that is literally ‘enlightened’, as all light shines through the large ceiling windows. This combination of diverse collections put together without interference of church, state or university made the Teylers Museum an instant hit when it opened in the late 18th century and still guarantees something interesting for everyone. Whereas most other museums specialised and focused during the 19th century,

the Teylers Museum held on to its core mission. “It’s a place where scientist and artists came together to study things and share the results with each other and the public,” says Scharloo. In that sense, it is still a museum in the classical sense of the even though there are no modern signs accompanying each object or touch screens to tell you more about what you see. Instead, the Teylers Museum takes you on a trip through time by showing the objects as they were historically collected from scientists and artists, thus guarding their authenticity. However, every visitor can get a free audio guide with over 23 hours of information so that they can choose which parts of the museum they wish to learn more about. This summer, visitors to the museum can get carried away by hot air balloons. The exhibition De Luchtballon (‘The Hot-Air Balloon’) connects the scientific study of air and gasses with the invention of the hotair balloon, the ‘balloon mania’ that took

over Europe, the Graf Zeppelin’s roundthe-world flight, as well as the Hindenburg disaster though photos, historical objects and film. A highlight of the exhibition is the option to “fly above the Alps” with virtual reality glasses. Are you ready for take-off? www.teylersmuseum.nl Issue 30 | June 2016 | 53