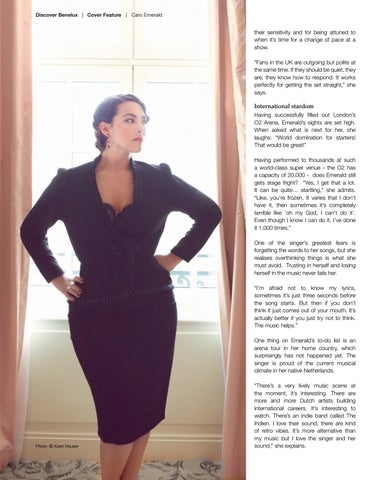 their sensitivity and for being attuned to when it’s time for a change of pace at a show. “Fans in the UK are outgoing but polite at the same time. If they should be quiet, they are, they know how to respond. It works perfectly for getting the set straight,” she says.

International stardom Having successfully filled out London’s O2 Arena, Emerald’s sights are set high. When asked what is next for her, she laughs: “World domination for starters! That would be great!” Having performed to thousands at such a world-class super venue - the O2 has a capacity of 20,000 - does Emerald still gets stage fright? “Yes, I get that a lot. It can be quite… startling,” she admits. “Like, you’re frozen. It varies that I don’t have it, then sometimes it’s completely terrible like ‘oh my God, I can’t do it’. Even though I know I can do it, I’ve done it 1,000 times.” One of the singer’s greatest fears is forgetting the words to her songs, but she realises overthinking things is what she must avoid. Trusting in herself and losing herself in the music never fails her. “I’m afraid not to know my lyrics, sometimes it’s just three seconds before the song starts. But then if you don’t think it just comes out of your mouth. It’s actually better if you just try not to think. The music helps.” One thing on Emerald’s to-do list is an arena tour in her home country, which surprisingly has not happened yet. The singer is proud of the current musical climate in her native Netherlands.

“There’s a very lively music scene at the moment, it’s interesting. There are more and more Dutch artists building international careers. It’s interesting to watch. There’s an indie band called The Indien. I love their sound, there are kind of retro vibes. It’s more alternative than my music but I love the singer and her sound,” she explains.