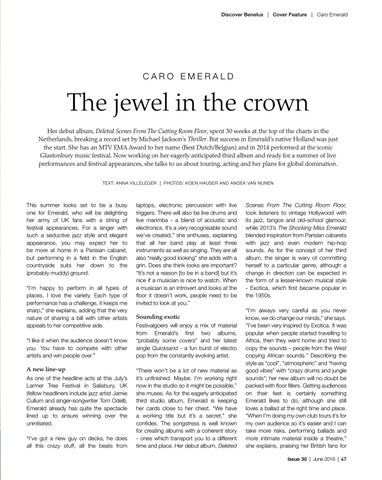 The jewel in the crown Her debut album, Deleted Scenes From The Cutting Room Floor, spent 30 weeks at the top of the charts in the Netherlands, breaking a record set by Michael Jackson’s Thriller. But success in Emerald’s native Holland was just the start. She has an MTV EMA Award to her name (Best Dutch/Belgian) and in 2014 performed at the iconic Glastonbury music festival. Now working on her eagerly anticipated third album and ready for a summer of live performances and festival appearances, she talks to us about touring, acting and her plans for global domination. TEXT: ANNA VILLELEGER | PHOTOS: KOEN HAUSER AND ANOEK VAN NUNEN

This summer looks set to be a busy one for Emerald, who will be delighting her army of UK fans with a string of festival appearances. For a singer with such a seductive jazz style and elegant appearance, you may expect her to be more at home in a Parisian cabaret, but performing in a field in the English countryside suits her down to the (probably muddy) ground. “I’m happy to perform in all types of places. I love the variety. Each type of performance has a challenge, it keeps me sharp,” she explains, adding that the very nature of sharing a bill with other artists appeals to her competitive side. “I like it when the audience doesn’t know you. You have to compete with other artists and win people over.”

A new line-up As one of the headline acts at this July’s Larmer Tree Festival in Salisbury, UK (fellow headliners include jazz artist Jamie Cullum and singer-songwriter Tom Odell), Emerald already has quite the spectacle lined up to ensure winning over the uninitiated. “I’ve got a new guy on decks, he does all this crazy stuff, all the beats from

laptops, electronic percussion with live triggers. There will also be live drums and live marimba - a blend of acoustic and electronics. It’s a very recognisable sound we’ve created,” she enthuses, explaining that all her band play at least three instruments as well as singing. They are all also “really good looking” she adds with a grin. Does she think looks are important? “It’s not a reason [to be in a band] but it’s nice if a musician is nice to watch. When a musician is an introvert and looks at the floor it doesn’t work, people need to be invited to look at you.”

Sounding exotic Festivalgoers will enjoy a mix of material from Emerald’s first two albums, “probably some covers” and her latest single Quicksand - a fun burst of electro pop from the constantly evolving artist. “There won’t be a lot of new material as it’s unfinished. Maybe. I’m working right now in the studio so it might be possible,” she muses. As for the eagerly anticipated third studio album, Emerald is keeping her cards close to her chest. “We have a working title but it’s a secret,” she confides. The songstress is well known for creating albums with a coherent story - ones which transport you to a different time and place. Her debut album, Deleted

Scenes From The Cutting Room Floor, took listeners to vintage Hollywood with its jazz, tangos and old-school glamour, while 2013’s The Shocking Miss Emerald blended inspiration from Parisian cabarets with jazz and even modern hip-hop sounds. As for the concept of her third album, the singer is wary of committing herself to a particular genre, although a change in direction can be expected in the form of a lesser-known musical style - Exotica, which first became popular in the 1950s. “I’m always very careful as you never know, we do change our minds,” she says. “I’ve been very inspired by Exotica. It was popular when people started travelling to Africa, then they went home and tried to copy the sounds - people from the West copying African sounds.” Describing the style as “cool”, “atmospheric” and “having good vibes” with “crazy drums and jungle sounds”; her new album will no doubt be packed with floor fillers. Getting audiences on their feet is certainly something Emerald likes to do, although she still loves a ballad at the right time and place. “When I’m doing my own club tours it’s for my own audience so it’s easier and I can take more risks, performing ballads and more intimate material inside a theatre,” she explains, praising her British fans for Issue 30 | June 2016 | 47