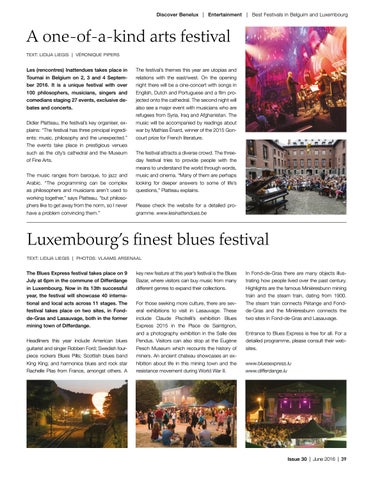 Les (rencontres) Inattendues takes place in Tournai in Belgium on 2, 3 and 4 September 2016. It is a unique festival with over 100 philosophers, musicians, singers and comedians staging 27 events, exclusive debates and concerts. Didier Platteau, the festival’s key organiser, explains: “The festival has three principal ingredients: music, philosophy and the unexpected.” The events take place in prestigious venues such as the city’s cathedral and the Museum of Fine Arts. The music ranges from baroque, to jazz and Arabic. “The programming can be complex as philosophers and musicians aren’t used to working together,” says Platteau, “but philosophers like to get away from the norm, so I never have a problem convincing them.”

The festival’s themes this year are utopias and relations with the east/west. On the opening night there will be a cine-concert with songs in English, Dutch and Portuguese and a film projected onto the cathedral. The second night will also see a major event with musicians who are refugees from Syria, Iraq and Afghanistan. The music will be accompanied by readings about war by Mathias Énard, winner of the 2015 Goncourt prize for French literature. The festival attracts a diverse crowd. The threeday festival tries to provide people with the means to understand the world through words, music and cinema. “Many of them are perhaps looking for deeper answers to some of life’s questions,” Platteau explains. Please check the website for a detailed programme. www.lesinattendues.be

The Blues Express festival takes place on 9 July at 6pm in the commune of Differdange in Luxembourg. Now in its 13th successful year, the festival will showcase 40 international and local acts across 11 stages. The festival takes place on two sites, in Fondde-Gras and Lasauvage, both in the former mining town of Differdange. Headliners this year include American blues guitarist and singer Robben Ford; Swedish fourpiece rockers Blues Pills; Scottish blues band King King; and harmonica blues and rock star Rachelle Plas from France, amongst others. A

key new feature at this year’s festival is the Blues Bazar, where visitors can buy music from many different genres to expand their collections. For those seeking more culture, there are several exhibitions to visit in Lasauvage. These include Claude Piscitelli’s exhibition Blues Express 2015 in the Place de Saintignon, and a photography exhibition in the Salle des Pendus. Visitors can also stop at the Eugène Pesch Museum which recounts the history of miners. An ancient chateau showcases an exhibition about life in this mining town and the resistance movement during World War II.

In Fond-de-Gras there are many objects illustrating how people lived over the past century. Highlights are the famous Minièresbunn mining train and the steam train, dating from 1900. The steam train connects Pétange and Fondde-Gras and the Minièresbunn connects the two sites in Fond-de-Gras and Lasauvage. Entrance to Blues Express is free for all. For a detailed programme, please consult their websites. www.bluesexpress.lu www.differdange.lu