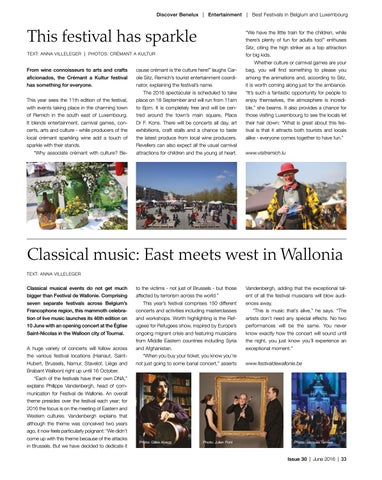 From wine connoisseurs to arts and crafts aficionados, the Crémant a Kultur festival has something for everyone. This year sees the 11th edition of the festival, with events taking place in the charming town of Remich in the south east of Luxembourg. It blends entertainment, carnival games, concerts, arts and culture - while producers of the local crémant sparkling wine add a touch of sparkle with their stands. “Why associate crémant with culture? Be-

cause crémant is the culture here!” laughs Carole Sitz, Remich’s tourist entertainment coordinator, explaining the festival’s name. The 2016 spectacular is scheduled to take place on 18 September and will run from 11am to 6pm. It is completely free and will be centred around the town’s main square, Place Dr F. Kons. There will be concerts all day, art exhibitions, craft stalls and a chance to taste the latest produce from local wine producers. Revellers can also expect all the usual carnival attractions for children and the young at heart.

“We have the little train for the children, while there’s plenty of fun for adults too!” enthuses Sitz, citing the high striker as a top attraction for big kids. Whether culture or carnival games are your bag, you will find something to please you among the animations and, according to Sitz, it is worth coming along just for the ambiance. “It’s such a fantastic opportunity for people to enjoy themselves, the atmosphere is incredible,” she beams. It also provides a chance for those visiting Luxembourg to see the locals let their hair down: “What is great about this festival is that it attracts both tourists and locals alike - everyone comes together to have fun.” www.visitremich.lu

Classical musical events do not get much bigger than Festival de Wallonie. Comprising seven separate festivals across Belgium’s Francophone region, this mammoth celebration of live music launches its 46th edition on 10 June with an opening concert at the Église Saint-Nicolas in the Walloon city of Tournai. A huge variety of concerts will follow across the various festival locations (Hainaut, SaintHubert, Brussels, Namur, Stavelot, Liège and Brabant Walloon) right up until 16 October. “Each of the festivals have their own DNA,” explains Philippe Vandenbergh, head of communication for Festival de Wallonie. An overall theme presides over the festival each year; for 2016 the focus is on the meeting of Eastern and Western cultures. Vandenbergh explains that although the theme was conceived two years ago, it now feels particularly poignant: “We didn’t come up with this theme because of the attacks in Brussels. But we have decided to dedicate it

to the victims - not just of Brussels - but those affected by terrorism across the world.” This year’s festival comprises 150 different concerts and activities including masterclasses and workshops. Worth highlighting is the Refugees for Refugees show, inspired by Europe’s ongoing migrant crisis and featuring musicians from Middle Eastern countries including Syria and Afghanistan. “When you buy your ticket, you know you’re not just going to some banal concert,” asserts

Vandenbergh, adding that the exceptional talent of all the festival musicians will blow audiences away. “This is music that’s alive,” he says. “The artists don’t need any special effects. No two performances will be the same. You never know exactly how the concert will sound until the night, you just know you’ll experience an exceptional moment.” www.festivaldewallonie.be