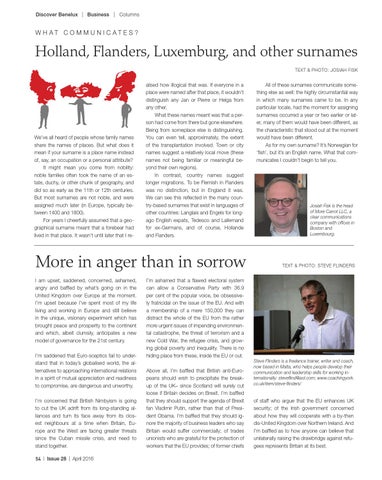 We’ve all heard of people whose family names share the names of places. But what does it mean if your surname is a place name instead of, say, an occupation or a personal attribute? It might mean you come from nobility: noble families often took the name of an estate, duchy, or other chunk of geography, and did so as early as the 11th or 12th centuries. But most surnames are not noble, and were assigned much later (in Europe, typically between 1400 and 1800). For years I cheerfully assumed that a geographical surname meant that a forebear had lived in that place. It wasn’t until later that I re-

alised how illogical that was. If everyone in a place were named after that place, it wouldn’t distinguish any Jan or Pierre or Helga from any other. What these names meant was that a person had come from there but gone elsewhere. Being from someplace else is distinguishing. You can even tell, approximately, the extent of the transplantation involved. Town or city names suggest a relatively local move (these names not being familiar or meaningful beyond their own regions). In contrast, country names suggest longer migrations. To be Flemish in Flanders was no distinction, but in England it was. We can see this reflected in the many country-based surnames that exist in languages of other countries: Langlais and Engels for longago English expats, Tedesco and Lallemand for ex-Germans, and of course, Hollande and Flanders.

More in anger than in sorrow I am upset, saddened, concerned, ashamed, angry and baffled by what’s going on in the United Kingdom over Europe at the moment. I’m upset because I’ve spent most of my life living and working in Europe and still believe in the unique, visionary experiment which has brought peace and prosperity to the continent and which, albeit clumsily, anticipates a new model of governance for the 21st century. I’m saddened that Euro-sceptics fail to understand that in today’s globalised world, the alternatives to approaching international relations in a spirit of mutual appreciation and readiness to compromise, are dangerous and unworthy. I’m concerned that British Nimbyism is going to cut the UK adrift from its long-standing alliances and turn its face away from its closest neighbours at a time when Britain, Europe and the West are facing greater threats since the Cuban missile crisis, and need to stand together. 54 | Issue 28 | April 2016

All of these surnames communicate something else as well: the highly circumstantial way in which many surnames came to be. In any particular locale, had the moment for assigning surnames occurred a year or two earlier or later, many of them would have been different, as the characteristic that stood out at the moment would have been different. As for my own surname? It’s Norwegian for ‘fish’, but it’s an English name. What that communicates I couldn’t begin to tell you.

I’m ashamed that a flawed electoral system can allow a Conservative Party with 36.9 per cent of the popular voice, be obsessively fratricidal on the issue of the EU. And with a membership of a mere 150,000 they can distract the whole of the EU from the rather more urgent issues of impending environmental catastrophe, the threat of terrorism and a new Cold War, the refugee crisis, and growing global poverty and inequality. There is no hiding place from these, inside the EU or out. Above all, I’m baffled that British anti-Europeans should wish to precipitate the breakup of the UK– since Scotland will surely cut loose if Britain decides on Brexit. I’m baffled that they should support the agenda of Brexit fan Vladimir Putin, rather than that of President Obama. I’m baffled that they should ignore the majority of business leaders who say Britain would suffer commercially; of trades unionists who are grateful for the protection of workers that the EU provides; of former chiefs

Steve Flinders is a freelance trainer, writer and coach, now based in Malta, who helps people develop their communication and leadership skills for working internationally: steveflind@aol.com; www.coachingyork. co.uk/item/steve-flinders/

of staff who argue that the EU enhances UK security; of the Irish government concerned about how they will cooperate with a by-then dis-United Kingdom over Northern Ireland. And I’m baffled as to how anyone can believe that unilaterally raising the drawbridge against refugees represents Britain at its best.