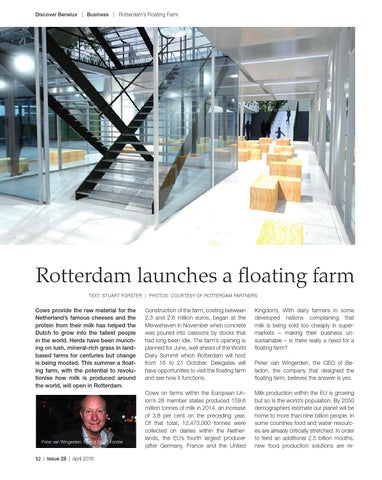 Cows provide the raw material for the Netherland’s famous cheeses and the protein from their milk has helped the Dutch to grow into the tallest people in the world. Herds have been munching on lush, mineral-rich grass in landbased farms for centuries but change is being mooted. This summer a floating farm, with the potential to revolutionise how milk is produced around the world, will open in Rotterdam.

Construction of the farm, costing between 2.3 and 2.6 million euros, began at the Merwehaven in November when concrete was poured into caissons by docks that had long been idle. The farm’s opening is planned for June, well ahead of the World Dairy Summit which Rotterdam will host from 16 to 21 October. Delegates will have opportunities to visit the floating farm and see how it functions.

Kingdom). With dairy farmers in some developed nations complaining that milk is being sold too cheaply in supermarkets – making their business unsustainable – is there really a need for a floating farm?

Cows on farms within the European Union’s 28 member states produced 159.6 million tonnes of milk in 2014, an increase of 3.8 per cent on the preceding year. Of that total, 12,473,000 tonnes were collected on dairies within the Netherlands, the EU’s fourth largest producer (after Germany, France and the United

Milk production within the EU is growing but so is the world’s population. By 2050 demographers estimate our planet will be home to more than nine billion people. In some countries food and water resources are already critically stretched. In order to feed an additional 2.5 billion mouths, new food production solutions are re-

Peter van Wingerden, the CEO of Beladon, the company that designed the floating farm, believes the answer is yes.