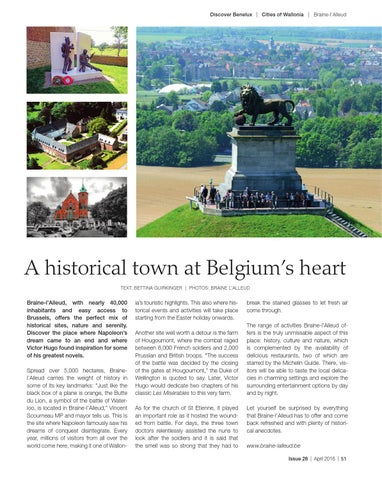 Braine-l’Alleud, with nearly 40,000 inhabitants and easy access to Brussels, offers the perfect mix of historical sites, nature and serenity. Discover the place where Napoleon’s dream came to an end and where Victor Hugo found inspiration for some of his greatest novels. Spread over 5,000 hectares, Brainel’Alleud carries the weight of history in some of its key landmarks: “Just like the black box of a plane is orange, the Butte du Lion, a symbol of the battle of Waterloo, is located in Braine-l’Alleud,” Vincent Scourneau MP and mayor tells us. This is the site where Napoleon famously saw his dreams of conquest disintegrate. Every year, millions of visitors from all over the world come here, making it one of Wallon-

ia’s touristic highlights. This also where historical events and activities will take place starting from the Easter holiday onwards. Another site well worth a detour is the farm of Hougoumont, where the combat raged between 8,000 French soldiers and 2,000 Prussian and British troops. “The success of the battle was decided by the closing of the gates at Hougoumont,” the Duke of Wellington is quoted to say. Later, Victor Hugo would dedicate two chapters of his classic Les Misérables to this very farm. As for the church of St Etienne, it played an important role as it hosted the wounded from battle. For days, the three town doctors relentlessly assisted the nuns to look after the soldiers and it is said that the smell was so strong that they had to

break the stained glasses to let fresh air come through. The range of activities Braine-l’Alleud offers is the truly unmissable aspect of this place: history, culture and nature, which is complemented by the availability of delicious restaurants, two of which are starred by the Michelin Guide. There, visitors will be able to taste the local delicacies in charming settings and explore the surrounding entertainment options by day and by night. Let yourself be surprised by everything that Braine-l’Alleud has to offer and come back refreshed and with plenty of historical anecdotes. www.braine-lalleud.be Issue 28 | April 2016 | 51