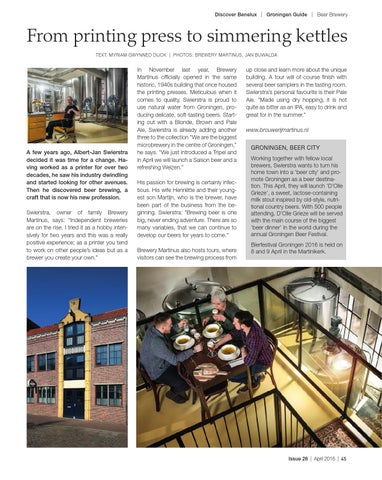 A few years ago, Albert-Jan Swierstra decided it was time for a change. Having worked as a printer for over two decades, he saw his industry dwindling and started looking for other avenues. Then he discovered beer brewing, a craft that is now his new profession. Swierstra, owner of family Brewery Martinus, says: “Independent breweries are on the rise. I tried it as a hobby intensively for two years and this was a really positive experience; as a printer you tend to work on other people’s ideas but as a brewer you create your own.”

In November last year, Brewery Martinus officially opened in the same historic, 1940s building that once housed the printing presses. Meticulous when it comes to quality, Swierstra is proud to use natural water from Groningen, producing delicate, soft-tasting beers. Starting out with a Blonde, Brown and Pale Ale, Swierstra is already adding another three to the collection “We are the biggest microbrewery in the centre of Groningen,” he says. “We just introduced a Tripel and in April we will launch a Saison beer and a refreshing Weizen.” His passion for brewing is certainly infectious. His wife Henriëtte and their youngest son Martijn, who is the brewer, have been part of the business from the beginning. Swierstra: “Brewing beer is one big, never ending adventure. There are so many variables, that we can continue to develop our beers for years to come.” Brewery Martinus also hosts tours, where visitors can see the brewing process from

up close and learn more about the unique building. A tour will of course finish with several beer samplers in the tasting room. Swierstra’s personal favourite is their Pale Ale. “Made using dry hopping, it is not quite as bitter as an IPA, easy to drink and great for in the summer.” www.brouwerijmartinus.nl GRONINGEN, BEER CITY Working together with fellow local brewers, Swierstra wants to turn his home town into a ‘beer city’ and promote Groningen as a beer destination. This April, they will launch ‘D’Olle Grieze’, a sweet, lactose-containing milk stout inspired by old-style, nutritional country beers. With 500 people attending, D’Olle Grieze will be served with the main course of the biggest ‘beer dinner’ in the world during the annual Groningen Beer Festival. Bierfestival Groningen 2016 is held on 8 and 9 April in the Martinikerk.