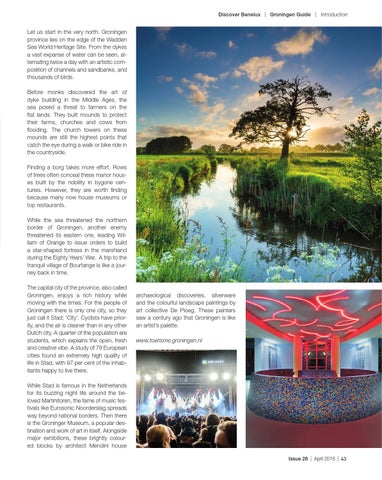 Let us start in the very north. Groningen province lies on the edge of the Wadden Sea World Heritage Site. From the dykes a vast expanse of water can be seen, alternating twice a day with an artistic composition of channels and sandbanks, and thousands of birds. Before monks discovered the art of dyke building in the Middle Ages, the sea posed a threat to farmers on the flat lands. They built mounds to protect their farms, churches and cows from flooding. The church towers on these mounds are still the highest points that catch the eye during a walk or bike ride in the countryside. Finding a borg takes more effort. Rows of trees often conceal these manor houses built by the nobility in bygone centuries. However, they are worth finding because many now house museums or top restaurants. While the sea threatened the northern border of Groningen, another enemy threatened its eastern one, leading William of Orange to issue orders to build a star-shaped fortress in the marshland during the Eighty Years’ War. A trip to the tranquil village of Bourtange is like a journey back in time. The capital city of the province, also called Groningen, enjoys a rich history while moving with the times. For the people of Groningen there is only one city, so they just call it Stad; ‘City’. Cyclists have priority, and the air is cleaner than in any other Dutch city. A quarter of the population are students, which explains the open, fresh and creative vibe. A study of 79 European cities found an extremely high quality of life in Stad, with 97 per cent of the inhabitants happy to live there.

archaeological discoveries, silverware and the colourful landscape paintings by art collective De Ploeg. These painters saw a century ago that Groningen is like an artist’s palette. www.toerisme.groningen.nl

While Stad is famous in the Netherlands for its buzzing night life around the beloved Martinitoren, the fame of music festivals like Eurosonic Noorderslag spreads way beyond national borders. Then there is the Groninger Museum, a popular destination and work of art in itself. Alongside major exhibitions, these brightly coloured blocks by architect Mendini house Issue 28 | April 2016 | 43