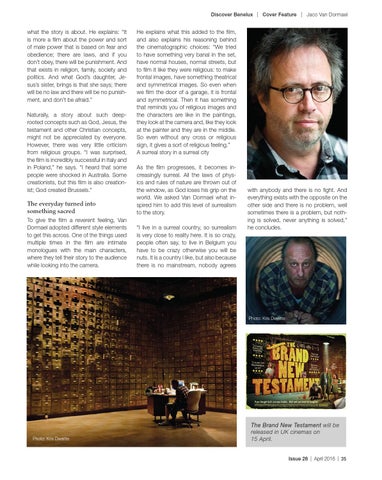 what the story is about. He explains: “It is more a film about the power and sort of male power that is based on fear and obedience; there are laws, and if you don’t obey, there will be punishment. And that exists in religion, family, society and politics. And what God’s daughter, Jesus’s sister, brings is that she says; there will be no law and there will be no punishment, and don’t be afraid.” Naturally, a story about such deeprooted concepts such as God, Jesus, the testament and other Christian concepts, might not be appreciated by everyone. However, there was very little criticism from religious groups. “I was surprised, the film is incredibly successful in Italy and in Poland,” he says. “I heard that some people were shocked in Australia. Some creationists, but this film is also creationist; God created Brussels.”

He explains what this added to the film, and also explains his reasoning behind the cinematographic choices: “We tried to have something very banal in the set, have normal houses, normal streets, but to film it like they were religious: to make frontal images, have something theatrical and symmetrical images. So even when we film the door of a garage, it is frontal and symmetrical. Then it has something that reminds you of religious images and the characters are like in the paintings, they look at the camera and, like they look at the painter and they are in the middle. So even without any cross or religious sign, it gives a sort of religious feeling.” A surreal story in a surreal city

The everyday turned into something sacred

As the film progresses, it becomes increasingly surreal. All the laws of physics and rules of nature are thrown out of the window, as God loses his grip on the world. We asked Van Dormael what inspired him to add this level of surrealism to the story.

To give the film a reverent feeling, Van Dormael adopted different style elements to get this across. One of the things used multiple times in the film are intimate monologues with the main characters, where they tell their story to the audience while looking into the camera.

“I live in a surreal country, so surrealism is very close to reality here. It is so crazy, people often say, to live in Belgium you have to be crazy otherwise you will be nuts. It is a country I like, but also because there is no mainstream, nobody agrees

If you thought God’s son was trouble... Wait until you meet his daughter.