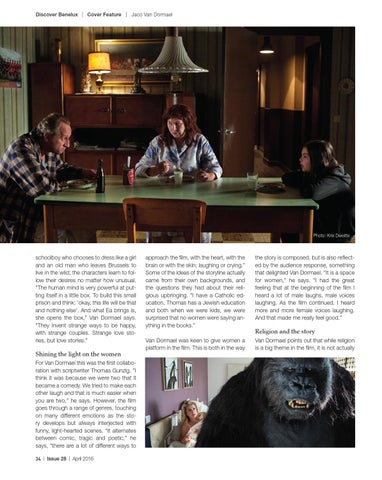 schoolboy who chooses to dress like a girl and an old man who leaves Brussels to live in the wild; the characters learn to follow their desires no matter how unusual. “The human mind is very powerful at putting itself in a little box. To build this small prison and think: ‘okay, this life will be that and nothing else’. And what Ea brings is, she opens the box,” Van Dormael says. “They invent strange ways to be happy, with strange couples. Strange love stories, but love stories.”

Shining the light on the women For Van Dormael this was the first collaboration with scriptwriter Thomas Gunzig. “I think it was because we were two that it became a comedy. We tried to make each other laugh and that is much easier when you are two,” he says. However, the film goes through a range of genres, touching on many different emotions as the story develops but always interjected with funny, light-hearted scenes. “It alternates between comic, tragic and poetic,” he says, “there are a lot of different ways to 34 | Issue 28 | April 2016

approach the film, with the heart, with the brain or with the skin; laughing or crying.” Some of the ideas of the storyline actually came from their own backgrounds, and the questions they had about their religious upbringing. “I have a Catholic education, Thomas has a Jewish education and both when we were kids, we were surprised that no women were saying anything in the books.” Van Dormael was keen to give women a platform in the film. This is both in the way

the story is composed, but is also reflected by the audience response, something that delighted Van Dormael. “It is a space for women,” he says. “I had the great feeling that at the beginning of the film I heard a lot of male laughs, male voices laughing. As the film continued, I heard more and more female voices laughing. And that made me really feel good.”

Religion and the story Van Dormael points out that while religion is a big theme in the film, it is not actually