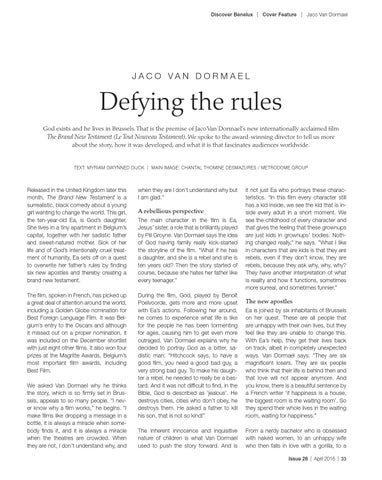 Defying the rules God exists and he lives in Brussels. That is the premise of Jaco Van Dormael’s new internationally acclaimed film The Brand New Testament (Le Tout Nouveau Testament). We spoke to the award-winning director to tell us more about the story, how it was developed, and what it is that fascinates audiences worldwide.

Released in the United Kingdom later this month, The Brand New Testament is a surrealistic, black comedy about a young girl wanting to change the world. This girl, the ten-year-old Ea, is God’s daughter. She lives in a tiny apartment in Belgium’s capital, together with her sadistic father and sweet-natured mother. Sick of her life and of God’s intentionally cruel treatment of humanity, Ea sets off on a quest to overwrite her father’s rules by finding six new apostles and thereby creating a brand new testament. The film, spoken in French, has picked up a great deal of attention around the world, including a Golden Globe nomination for Best Foreign Language Film. It was Belgium’s entry to the Oscars and although it missed out on a proper nomination, it was included on the December shortlist with just eight other films. It also won four prizes at the Magritte Awards, Belgium’s most important film awards, including Best Film. We asked Van Dormael why he thinks the story, which is so firmly set in Brussels, appeals to so many people. “I never know why a film works,” he begins. “I make films like dropping a message in a bottle, it is always a miracle when somebody finds it, and it is always a miracle when the theatres are crowded. When they are not, I don’t understand why, and

when they are I don’t understand why but I am glad.”

A rebellious perspective The main character in the film is Ea, Jesus’ sister, a role that is brilliantly played by Pili Groyne. Van Dormael says the idea of God having family really kick-started the storyline of the film. “What if he has a daughter, and she is a rebel and she is ten years old? Then the story started of course, because she hates her father like every teenager.” During the film, God, played by Benoît Poelvoorde, gets more and more upset with Ea’s actions. Following her around, he comes to experience what life is like for the people he has been tormenting for ages, causing him to get even more outraged. Van Dormael explains why he decided to portray God as a bitter, sadistic man: “Hitchcock says, to have a good film, you need a good bad guy, a very strong bad guy. To make his daughter a rebel, he needed to really be a bastard. And it was not difficult to find, in the Bible, God is described as ‘jealous’. He destroys cities, cities who don’t obey, he destroys them. He asked a father to kill his son, that is not so kind!” The inherent innocence and inquisitive nature of children is what Van Dormael used to push the story forward. And is

it not just Ea who portrays these characteristics. “In this film every character still has a kid inside, we see the kid that is inside every adult in a short moment. We see the childhood of every character and that gives the feeling that these grownups are just kids in grownups’ bodies. Nothing changed really,” he says. “What I like in characters that are kids is that they are rebels, even if they don’t know, they are rebels, because they ask why, why, why? They have another interpretation of what is reality and how it functions, sometimes more surreal, and sometimes funnier.”

The new apostles Ea is joined by six inhabitants of Brussels on her quest. These are all people that are unhappy with their own lives, but they feel like they are unable to change this. With Ea’s help, they get their lives back on track, albeit in completely unexpected ways. Van Dormael says: “They are six magnificent losers. They are six people who think that their life is behind then and that love will not appear anymore. And you know, there is a beautiful sentence by a French writer ‘if happiness is a house, the biggest room is the waiting room’. So they spend their whole lives in the waiting room, waiting for happiness.” From a nerdy bachelor who is obsessed with naked women, to an unhappy wife who then falls in love with a gorilla, to a Issue 28 | April 2016 | 33