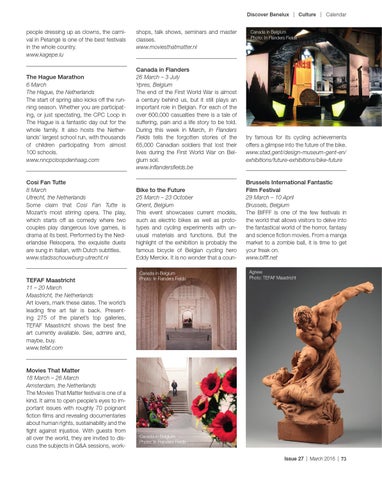 people dressing up as clowns, the carnival in Petangé is one of the best festivals in the whole country. www.kagepe.lu

Canada in Flanders The Hague Marathon 6 March The Hague, the Netherlands The start of spring also kicks off the running season. Whether you are participating, or just spectating, the CPC Loop in The Hague is a fantastic day out for the whole family. It also hosts the Netherlands’ largest school run, with thousands of children participating from almost 100 schools. www.nncpcloopdenhaag.com

26 March – 3 July Ypres, Belgium The end of the First World War is almost a century behind us, but it still plays an important role in Belgian. For each of the over 600,000 casualties there is a tale of suffering, pain and a life story to be told. During this week in March, In Flanders Fields tells the forgotten stories of the 65,000 Canadian soldiers that lost their lives during the First World War on Belgium soil. www.inflandersfields.be

Bike to the Future

25 March – 23 October Ghent, Belgium This event showcases current models, such as electric bikes as well as prototypes and cycling experiments with unusual materials and functions. But the highlight of the exhibition is probably the famous bicycle of Belgian cycling hero Eddy Merckx. It is no wonder that a coun-

29 March – 10 April Brussels, Belgium The BIFFF is one of the few festivals in the world that allows visitors to delve into the fantastical world of the horror, fantasy and science fiction movies. From a manga market to a zombie ball, it is time to get your freak on. www.bifff.net

Così Fan Tutte 8 March Utrecht, the Netherlands Some claim that Così Fan Tutte is Mozart’s most stirring opera. The play, which starts off as comedy where two couples play dangerous love games, is drama at its best. Performed by the Nederlandse Reisopera, the exquisite duets are sung in Italian, with Dutch subtitles. www.stadsschouwburg-utrecht.nl

try famous for its cycling achievements offers a glimpse into the future of the bike. www.stad.gent/design-museum-gent-en/ exhibitions/future-exhibitions/bike-future

Movies That Matter 18 March – 26 March Amsterdam, the Netherlands The Movies That Matter festival is one of a kind. It aims to open people’s eyes to important issues with roughly 70 poignant fiction films and revealing documentaries about human rights, sustainability and the fight against injustice. With guests from all over the world, they are invited to discuss the subjects in Q&amp;A sessions, work-