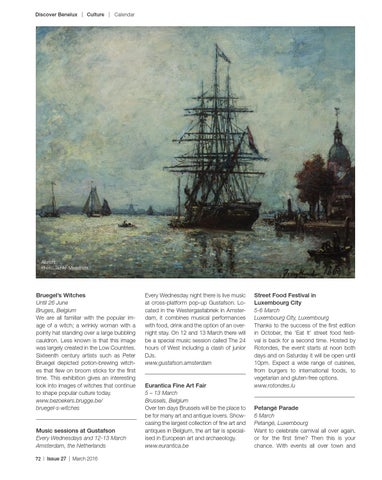 Bruegel’s Witches Until 26 June Bruges, Belgium We are all familiar with the popular image of a witch; a wrinkly woman with a pointy hat standing over a large bubbling cauldron. Less known is that this image was largely created in the Low Countries. Sixteenth century artists such as Peter Bruegel depicted potion-brewing witches that flew on broom sticks for the first time. This exhibition gives an interesting look into images of witches that continue to shape popular culture today. www.bezoekers.brugge.be/ bruegel-s-witches

Music sessions at Gustafson Every Wednesdays and 12-13 March Amsterdam, the Netherlands 72 | Issue 27 | March 2016

Every Wednesday night there is live music at cross-platform pop-up Gustafson. Located in the Westergasfabriek in Amsterdam, it combines musical performances with food, drink and the option of an overnight stay. On 12 and 13 March there will be a special music session called The 24 hours of West including a clash of junior DJs. www.gustafson.amsterdam

Eurantica Fine Art Fair 5 – 13 March Brussels, Belgium Over ten days Brussels will be the place to be for many art and antique lovers. Showcasing the largest collection of fine art and antiques in Belgium, the art fair is specialised in European art and archaeology. www.eurantica.be

Street Food Festival in Luxembourg City 5-6 March Luxembourg City, Luxembourg Thanks to the success of the first edition in October, the ‘Eat It’ street food festival is back for a second time. Hosted by Rotondes, the event starts at noon both days and on Saturday it will be open until 10pm. Expect a wide range of cuisines, from burgers to international foods, to vegetarian and gluten-free options. www.rotondes.lu

Petangé Parade 6 March Petangé, Luxembourg Want to celebrate carnival all over again, or for the first time? Then this is your chance. With events all over town and