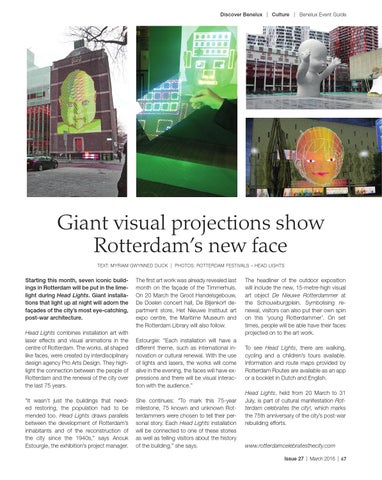 Starting this month, seven iconic buildings in Rotterdam will be put in the limelight during Head Lights. Giant installations that light up at night will adorn the façades of the city’s most eye-catching, post-war architecture.

Head Lights combines installation art with laser effects and visual animations in the centre of Rotterdam. The works, all shaped like faces, were created by interdisciplinary design agency Pro Arts Design. They highlight the connection between the people of Rotterdam and the renewal of the city over the last 75 years.

Estourgie: “Each installation will have a different theme, such as international innovation or cultural renewal. With the use of lights and lasers, the works will come alive in the evening, the faces will have expressions and there will be visual interaction with the audience.”

“It wasn’t just the buildings that needed restoring, the population had to be mended too. Head Lights draws parallels between the development of Rotterdam’s inhabitants and of the reconstruction of the city since the 1940s,” says Anouk Estourgie, the exhibition’s project manager.

She continues: “To mark this 75-year milestone, 75 known and unknown Rotterdammers were chosen to tell their personal story. Each Head Lights installation will be connected to one of these stories as well as telling visitors about the history of the building,” she says.

The headliner of the outdoor exposition will include the new, 15-metre-high visual art object De Nieuwe Rotterdammer at the Schouwburgplein. Symbolising renewal, visitors can also put their own spin on this ‘young Rotterdammer’. On set times, people will be able have their faces projected on to the art work. To see Head Lights, there are walking, cycling and a children’s tours available. Information and route maps provided by Rotterdam Routes are available as an app or a booklet in Dutch and English. Head Lights, held from 20 March to 31 July, is part of cultural manifestation Rotterdam celebrates the city!, which marks the 75th anniversary of the city’s post-war rebuilding efforts.