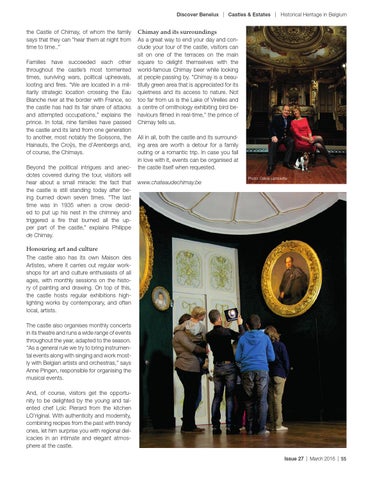 the Castle of Chimay, of whom the family says that they can “hear them at night from time to time..” Families have succeeded each other throughout the castle’s most tormented times, surviving wars, political upheavals, looting and fires. “We are located in a militarily strategic location crossing the Eau Blanche river at the border with France, so the castle has had its fair share of attacks and attempted occupations,” explains the prince. In total, nine families have passed the castle and its land from one generation to another, most notably the Soissons, the Hainauts, the Croÿs, the d’Arenbergs and, of course, the Chimays. Beyond the political intrigues and anecdotes covered during the tour, visitors will hear about a small miracle: the fact that the castle is still standing today after being burned down seven times. “The last time was in 1935 when a crow decided to put up his nest in the chimney and triggered a fire that burned all the upper part of the castle,” explains Philippe de Chimay.

Chimay and its surroundings As a great way to end your day and conclude your tour of the castle, visitors can sit on one of the terraces on the main square to delight themselves with the world-famous Chimay beer while looking at people passing by. “Chimay is a beautifully green area that is appreciated for its quietness and its access to nature. Not too far from us is the Lake of Virelles and a centre of ornithology exhibiting bird behaviours filmed in real-time,” the prince of Chimay tells us. All in all, both the castle and its surrounding area are worth a detour for a family outing or a romantic trip. In case you fall in love with it, events can be organised at the castle itself when requested. www.chateaudechimay.be

Honouring art and culture The castle also has its own Maison des Artistes, where it carries out regular workshops for art and culture enthusiasts of all ages, with monthly sessions on the history of painting and drawing. On top of this, the castle hosts regular exhibitions highlighting works by contemporary, and often local, artists. The castle also organises monthly concerts in its theatre and runs a wide range of events throughout the year, adapted to the season. “As a general rule we try to bring instrumental events along with singing and work mostly with Belgian artists and orchestras,” says Anne Pingen, responsible for organising the musical events. And, of course, visitors get the opportunity to be delighted by the young and talented chef Loïc Pierard from the kitchen LO’riginal. With authenticity and modernity, combining recipes from the past with trendy ones, let him surprise you with regional delicacies in an intimate and elegant atmosphere at the castle. Issue 27 | March 2016 | 55