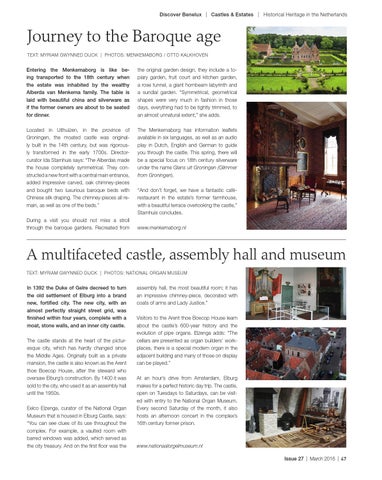 Entering the Menkemaborg is like being transported to the 18th century when the estate was inhabited by the wealthy Alberda van Menkema family. The table is laid with beautiful china and silverware as if the former owners are about to be seated for dinner.

the original garden design, they include a topiary garden, fruit court and kitchen garden, a rose tunnel, a giant hornbeam labyrinth and a sundial garden. “Symmetrical, geometrical shapes were very much in fashion in those days, everything had to be tightly trimmed, to an almost unnatural extent,” she adds.

Located in Uithuizen, in the province of Groningen, the moated castle was originally built in the 14th century, but was rigorously transformed in the early 1700s. Directorcurator Ida Stamhuis says: “The Alberdas made the house completely symmetrical. They constructed a new front with a central main entrance, added impressive carved, oak chimney-pieces and bought two luxurious baroque beds with Chinese silk draping. The chimney-pieces all remain, as well as one of the beds.”

The Menkemaborg has information leaflets available in six languages, as well as an audio play in Dutch, English and German to guide you through the castle. This spring, there will be a special focus on 18th century silverware under the name Glans uit Groningen (Glimmer from Groningen).

During a visit you should not miss a stroll through the baroque gardens. Recreated from

“And don’t forget, we have a fantastic caférestaurant in the estate’s former farmhouse, with a beautiful terrace overlooking the castle,” Stamhuis concludes. www.menkemaborg.nl

In 1392 the Duke of Gelre decreed to turn the old settlement of Elburg into a brand new, fortified city. The new city, with an almost perfectly straight street grid, was finished within four years, complete with a moat, stone walls, and an inner city castle. The castle stands at the heart of the picturesque city, which has hardly changed since the Middle Ages. Originally built as a private mansion, the castle is also known as the Arent thoe Boecop House, after the steward who oversaw Elburg’s construction. By 1400 it was sold to the city, who used it as an assembly hall until the 1950s. Eelco Elzenga, curator of the National Organ Museum that is housed in Elburg Castle, says: “You can see clues of its use throughout the complex. For example, a vaulted room with barred windows was added, which served as the city treasury. And on the first floor was the

assembly hall, the most beautiful room; it has an impressive chimney-piece, decorated with coats of arms and Lady Justice.” Visitors to the Arent thoe Boecop House learn about the castle’s 600-year history and the evolution of pipe organs. Elzenga adds: “The cellars are presented as organ builders’ workplaces, there is a special modern organ in the adjacent building and many of those on display can be played.” At an hour’s drive from Amsterdam, Elburg makes for a perfect historic day trip. The castle, open on Tuesdays to Saturdays, can be visited with entry to the National Organ Museum. Every second Saturday of the month, it also hosts an afternoon concert in the complex’s 16th century former prison.