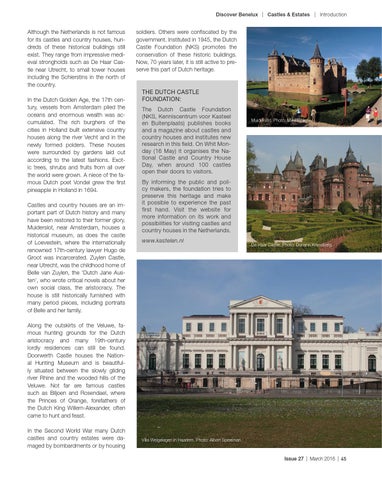 Although the Netherlands is not famous for its castles and country houses, hundreds of these historical buildings still exist. They range from impressive medieval strongholds such as De Haar Castle near Utrecht, to small tower houses including the Schierstins in the north of the country. In the Dutch Golden Age, the 17th century, vessels from Amsterdam plied the oceans and enormous wealth was accumulated. The rich burghers of the cities in Holland built extensive country houses along the river Vecht and in the newly formed polders. These houses were surrounded by gardens laid out according to the latest fashions. Exotic trees, shrubs and fruits from all over the world were grown. A niece of the famous Dutch poet Vondel grew the first pineapple in Holland in 1694. Castles and country houses are an important part of Dutch history and many have been restored to their former glory. Muiderslot, near Amsterdam, houses a historical museum, as does the castle of Loevestein, where the internationally renowned 17th-century lawyer Hugo de Groot was incarcerated. Zuylen Castle, near Utrecht, was the childhood home of Belle van Zuylen, the â&amp;#x20AC;&amp;#x2DC;Dutch Jane Austenâ&amp;#x20AC;&amp;#x2122;, who wrote critical novels about her own social class, the aristocracy. The house is still historically furnished with many period pieces, including portraits of Belle and her family.

soldiers. Others were confiscated by the government. Instituted in 1945, the Dutch Castle Foundation (NKS) promotes the conservation of these historic buildings. Now, 70 years later, it is still active to preserve this part of Dutch heritage.

THE DUTCH CASTLE FOUNDATION: The Dutch Castle Foundation (NKS, Kenniscentrum voor Kasteel en Buitenplaats) publishes books and a magazine about castles and country houses and institutes new research in this field. On Whit Monday (16 May) it organises the National Castle and Country House Day, when around 100 castles open their doors to visitors.

By informing the public and policy makers, the foundation tries to preserve this heritage and make it possible to experience the past first hand. Visit the website for more information on its work and possibilities for visiting castles and country houses in the Netherlands. www.kastelen.nl

Along the outskirts of the Veluwe, famous hunting grounds for the Dutch aristocracy and many 19th-century lordly residences can still be found. Doorwerth Castle houses the National Hunting Museum and is beautifully situated between the slowly gliding river Rhine and the wooded hills of the Veluwe. Not far are famous castles such as Biljoen and Rosendael, where the Princes of Orange, forefathers of the Dutch King Willem-Alexander, often came to hunt and feast. In the Second World War many Dutch castles and country estates were damaged by bombardments or by housing