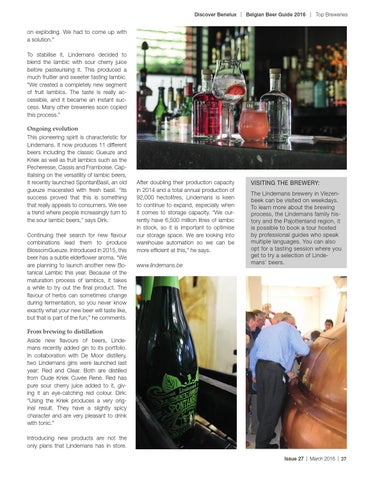 on exploding. We had to come up with a solution.” To stabilise it, Lindemans decided to blend the lambic with sour cherry juice before pasteurising it. This produced a much fruitier and sweeter tasting lambic. “We created a completely new segment of fruit lambics. The taste is really accessible, and it became an instant success. Many other breweries soon copied this process.”

Ongoing evolution This pioneering spirit is characteristic for Lindemans. It now produces 11 different beers including the classic Gueuze and Kriek as well as fruit lambics such as the Pecheresse, Cassis and Framboise. Capitalising on the versatility of lambic beers, it recently launched SpontanBasil, an old gueuze macerated with fresh basil. “Its success proved that this is something that really appeals to consumers. We see a trend where people increasingly turn to the sour lambic beers,” says Dirk. Continuing their search for new flavour combinations lead them to produce BlossomGueuze. Introduced in 2015, this beer has a subtle elderflower aroma. “We are planning to launch another new Botanical Lambic this year. Because of the maturation process of lambics, it takes a while to try out the final product. The flavour of herbs can sometimes change during fermentation, so you never know exactly what your new beer will taste like, but that is part of the fun,” he comments.

After doubling their production capacity in 2014 and a total annual production of 92,000 hectolitres, Lindemans is keen to continue to expand, especially when it comes to storage capacity. “We currently have 6,500 million litres of lambic in stock, so it is important to optimise our storage space. We are looking into warehouse automation so we can be more efficient at this,” he says. www.lindemans.be

VISITING THE BREWERY: The Lindemans brewery in Vlezenbeek can be visited on weekdays. To learn more about the brewing process, the Lindemans family history and the Pajottenland region, it is possible to book a tour hosted by professional guides who speak multiple languages. You can also opt for a tasting session where you get to try a selection of Lindemans’ beers.

From brewing to distillation Aside new flavours of beers, Lindemans recently added gin to its portfolio. In collaboration with De Moor distillery, two Lindemans gins were launched last year: Red and Clear. Both are distilled from Oude Kriek Cuvée René. Red has pure sour cherry juice added to it, giving it an eye-catching red colour. Dirk: “Using the Kriek produces a very original result. They have a slightly spicy character and are very pleasant to drink with tonic.” Introducing new products are not the only plans that Lindemans has in store. Issue 27 | March 2016 | 37