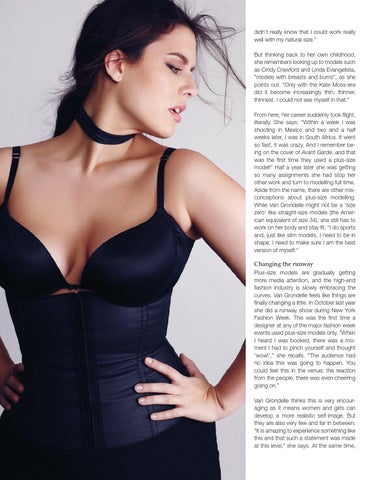 didn’t really know that I could work really well with my natural size.” But thinking back to her own childhood, she remembers looking up to models such as Cindy Crawford and Linda Evangelista, “models with breasts and bums”, as she points out. “Only with the Kate Moss-era did it become increasingly thin, thinner, thinnest. I could not see myself in that.” From here, her career suddenly took flight, literally. She says: “Within a week I was shooting in Mexico and two and a half weeks later, I was in South Africa. It went so fast, it was crazy. And I remember being on the cover of Avant Garde, and that was the first time they used a plus-size model!” Half a year later she was getting so many assignments she had stop her other work and turn to modelling full time. Aside from the name, there are other misconceptions about plus-size modelling. While Van Grondelle might not be a ‘size zero’ like straight-size models (the American equivalent of size 34), she still has to work on her body and stay fit. “I do sports and, just like slim models, I need to be in shape. I need to make sure I am the best version of myself.”

Changing the runway Plus-size models are gradually getting more media attention, and the high-end fashion industry is slowly embracing the curves. Van Grondelle feels like things are finally changing a little. In October last year she did a runway show during New York Fashion Week. This was the first time a designer at any of the major fashion week events used plus-size models only. “When I heard I was booked, there was a moment I had to pinch yourself and thought ‘wow!’,” she recalls. “The audience had no idea this was going to happen. You could feel this in the venue; the reaction from the people, there was even cheering going on.” Van Grondelle thinks this is very encouraging as it means women and girls can develop a more realistic self-image. But they are also very few and far in between. “It is amazing to experience something like this and that such a statement was made at this level,” she says. At the same time,