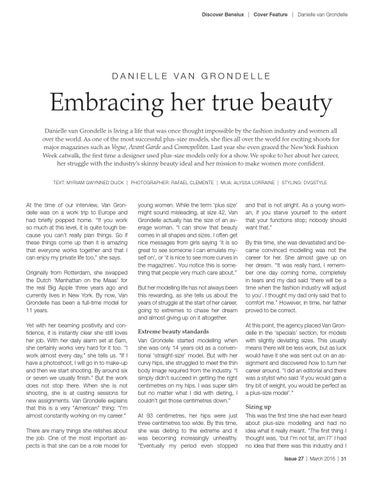 Embracing her true beauty Danielle van Grondelle is living a life that was once thought impossible by the fashion industry and women all over the world. As one of the most successful plus-size models, she flies all over the world for exciting shoots for major magazines such as Vogue, Avant Garde and Cosmopolitan. Last year she even graced the New York Fashion Week catwalk, the first time a designer used plus-size models only for a show. We spoke to her about her career, her struggle with the industry’s skinny beauty ideal and her mission to make women more confident. TEXT: MYRIAM GWYNNED DIJCK | PHOTOGRAPHER: RAFAEL CLEMENTE | MUA: ALYSSA LORRAINE | STYLING: DVGSTYLE

At the time of our interview, Van Grondelle was on a work trip to Europe and had briefly popped home. “If you work so much at this level, it is quite tough because you can’t really plan things. So if these things come up then it is amazing that everyone works together and that I can enjoy my private life too,” she says. Originally from Rotterdam, she swapped the Dutch ‘Manhattan on the Maas’ for the real Big Apple three years ago and currently lives in New York. By now, Van Grondelle has been a full-time model for 11 years. Yet with her beaming positivity and confidence, it is instantly clear she still loves her job. With her daily alarm set at 6am, she certainly works very hard for it too. “I work almost every day,” she tells us. “If I have a photoshoot, I will go in to make-up and then we start shooting. By around six or seven we usually finish.” But the work does not stop there. When she is not shooting, she is at casting sessions for new assignments. Van Grondelle explains that this is a very “American” thing: “I’m almost constantly working on my career.” There are many things she relishes about the job. One of the most important aspects is that she can be a role model for

young women. While the term ‘plus size’ might sound misleading, at size 42, Van Grondelle actually has the size of an average woman. “I can show that beauty comes in all shapes and sizes. I often get nice messages from girls saying ‘it is so great to see someone I can emulate myself on’, or ‘it is nice to see more curves in the magazines’. You notice this is something that people very much care about.” But her modelling life has not always been this rewarding, as she tells us about the years of struggle at the start of her career, going to extremes to chase her dream and almost giving up on it altogether.

Extreme beauty standards Van Grondelle started modelling when she was only 14 years old as a conventional ‘straight-size’ model. But with her curvy hips, she struggled to meet the thin body image required from the industry. “I simply didn’t succeed in getting the right centimetres on my hips. I was super slim but no matter what I did with dieting, I couldn’t get those centimetres down.” At 93 centimetres, her hips were just three centimetres too wide. By this time, she was dieting to the extreme and it was becoming increasingly unhealthy. “Eventually my period even stopped

and that is not alright. As a young woman, if you starve yourself to the extent that your functions stop; nobody should want that.” By this time, she was devastated and became convinced modelling was not the career for her. She almost gave up on her dream. “It was really hard, I remember one day coming home, completely in tears and my dad said ‘there will be a time when the fashion industry will adjust to you’. I thought my dad only said that to comfort me.” However, in time, her father proved to be correct. At this point, the agency placed Van Grondelle in the ‘specials’ section, for models with slightly deviating sizes. This usually means there will be less work, but as luck would have it she was sent out on an assignment and discovered how to turn her career around. “I did an editorial and there was a stylist who said ‘if you would gain a tiny bit of weight, you would be perfect as a plus-size model’.”

Sizing up This was the first time she had ever heard about plus-size modelling and had no idea what it really meant. “The first thing I thought was, ‘but I’m not fat, am I?’ I had no idea that there was this industry and I Issue 27 | March 2016 | 31