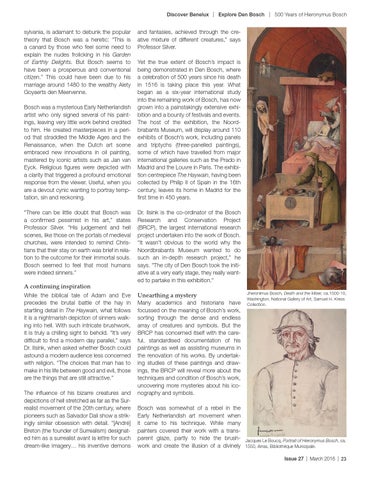 sylvania, is adamant to debunk the popular theory that Bosch was a heretic: “This is a canard by those who feel some need to explain the nudes frolicking in his Garden of Earthly Delights. But Bosch seems to have been a prosperous and conventional citizen.” This could have been due to his marriage around 1480 to the wealthy Alety Goyaerts den Meervenne. Bosch was a mysterious Early Netherlandish artist who only signed several of his paintings, leaving very little work behind credited to him. He created masterpieces in a period that straddled the Middle Ages and the Renaissance, when the Dutch art scene embraced new innovations in oil painting, mastered by iconic artists such as Jan van Eyck. Religious figures were depicted with a clarity that triggered a profound emotional response from the viewer. Useful, when you are a devout cynic wanting to portray temptation, sin and reckoning. “There can be little doubt that Bosch was a confirmed pessimist in his art,” states Professor Silver. “His judgement and hell scenes, like those on the portals of medieval churches, were intended to remind Christians that their stay on earth was brief in relation to the outcome for their immortal souls. Bosch seemed to feel that most humans were indeed sinners.”

A continuing inspiration While the biblical tale of Adam and Eve precedes the brutal battle of the hay in startling detail in The Haywain, what follows it is a nightmarish depiction of sinners walking into hell. With such intricate brushwork, it is truly a chilling sight to behold. “It’s very difficult to find a modern day parallel,” says Dr. Ilsink, when asked whether Bosch could astound a modern audience less concerned with religion. “The choices that man has to make in his life between good and evil, those are the things that are still attractive.” The influence of his bizarre creatures and depictions of hell stretched as far as the Surrealist movement of the 20th century, where pioneers such as Salvador Dalí show a strikingly similar obsession with detail. “[André] Breton (the founder of Surrealism) designated him as a surrealist avant la lettre for such dream-like imagery… his inventive demons

and fantasies, achieved through the creative mixture of different creatures,” says Professor Silver. Yet the true extent of Bosch’s impact is being demonstrated in Den Bosch, where a celebration of 500 years since his death in 1516 is taking place this year. What began as a six-year international study into the remaining work of Bosch, has now grown into a painstakingly extensive exhibition and a bounty of festivals and events. The host of the exhibition, the Noordbrabants Museum, will display around 110 exhibits of Bosch’s work, including panels and triptychs (three-panelled paintings), some of which have travelled from major international galleries such as the Prado in Madrid and the Louvre in Paris. The exhibition centrepiece The Haywain, having been collected by Philip II of Spain in the 16th century, leaves its home in Madrid for the first time in 450 years. Dr. Ilsink is the co-ordinator of the Bosch Research and Conservation Project (BRCP), the largest international research project undertaken into the work of Bosch. “It wasn’t obvious to the world why the Noordbrabants Museum wanted to do such an in-depth research project,” he says. “The city of Den Bosch took the initiative at a very early stage, they really wanted to partake in this exhibition.”

Unearthing a mystery Many academics and historians have focussed on the meaning of Bosch’s work, sorting through the dense and endless array of creatures and symbols. But the BRCP has concerned itself with the careful, standardised documentation of his paintings as well as assisting museums in the renovation of his works. By undertaking studies of these paintings and drawings, the BRCP will reveal more about the techniques and condition of Bosch’s work, uncovering more mysteries about his iconography and symbols. Bosch was somewhat of a rebel in the Early Netherlandish art movement when it came to his technique. While many painters covered their work with a transparent glaze, partly to hide the brushwork and create the illusion of a divinely