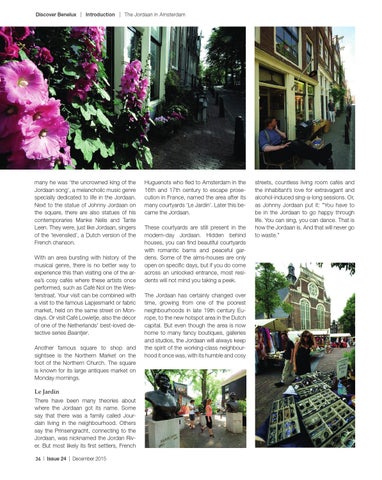 many he was ‘the uncrowned king of the Jordaan song’, a melancholic music genre specially dedicated to life in the Jordaan. Next to the statue of Johnny Jordaan on the square, there are also statues of his contemporaries Manke Nelis and Tante Leen. They were, just like Jordaan, singers of the ‘levenslied’, a Dutch version of the French chanson. With an area bursting with history of the musical genre, there is no better way to experience this than visiting one of the area’s cosy cafés where these artists once performed, such as Café Nol on the Westerstraat. Your visit can be combined with a visit to the famous Lapjesmarkt or fabric market, held on the same street on Mondays. Or visit Café Lowietje, also the décor of one of the Netherlands’ best-loved detective series Baantjer. Another famous square to shop and sightsee is the Northern Market on the foot of the Northern Church. The square is known for its large antiques market on Monday mornings.

Le Jardin There have been many theories about where the Jordaan got its name. Some say that there was a family called Jourdain living in the neighbourhood. Others say the Prinsengracht, connecting to the Jordaan, was nicknamed the Jordan River. But most likely its first settlers, French 36 | Issue 24 | December 2015

Huguenots who fled to Amsterdam in the 16th and 17th century to escape prosecution in France, named the area after its many courtyards ‘Le Jardin’. Later this became the Jordaan. These courtyards are still present in the modern-day Jordaan. Hidden behind houses, you can find beautiful courtyards with romantic barns and peaceful gardens. Some of the alms-houses are only open on specific days, but if you do come across an unlocked entrance, most residents will not mind you taking a peek. The Jordaan has certainly changed over time, growing from one of the poorest neighbourhoods in late 19th century Europe, to the new hotspot area in the Dutch capital. But even though the area is now home to many fancy boutiques, galleries and studios, the Jordaan will always keep the spirit of the working-class neighbourhood it once was, with its humble and cosy

streets, countless living room cafés and the inhabitant’s love for extravagant and alcohol-induced sing-a-long sessions. Or, as Johnny Jordaan put it: “You have to be in the Jordaan to go happy through life. You can sing, you can dance. That is how the Jordaan is. And that will never go to waste.”