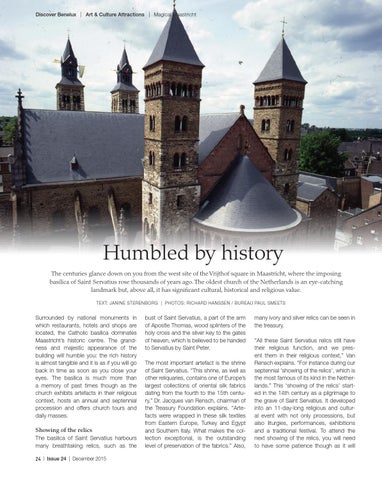 Humbled by history The centuries glance down on you from the west site of the Vrijthof square in Maastricht, where the imposing basilica of Saint Servatius rose thousands of years ago. The oldest church of the Netherlands is an eye-catching landmark but, above all, it has significant cultural, historical and religious value. TEXT: JANINE STERENBORG | PHOTOS: RICHARD HANSSEN / BUREAU PAUL SMEETS

Surrounded by national monuments in which restaurants, hotels and shops are located, the Catholic basilica dominates Maastricht’s historic centre. The grandness and majestic appearance of the building will humble you: the rich history is almost tangible and it is as if you will go back in time as soon as you close your eyes. The basilica is much more than a memory of past times though as the church exhibits artefacts in their religious context, hosts an annual and septennial procession and offers church tours and daily masses.

Showing of the relics The basilica of Saint Servatius harbours many breathtaking relics, such as the 24 | Issue 24 | December 2015

bust of Saint Servatius, a part of the arm of Apostle Thomas, wood splinters of the holy cross and the silver key to the gates of heaven, which is believed to be handed to Servatius by Saint Peter. The most important artefact is the shrine of Saint Servatius. “This shrine, as well as other reliquaries, contains one of Europe’s largest collections of oriental silk fabrics dating from the fourth to the 15th century,” Dr. Jacques van Rensch, chairman of the Treasury Foundation explains. “Artefacts were wrapped in these silk textiles from Eastern Europe, Turkey and Egypt and Southern Italy. What makes the collection exceptional, is the outstanding level of preservation of the fabrics.” Also,

many ivory and silver relics can be seen in the treasury. “All these Saint Servatius relics still have their religious function, and we present them in their religious context,” Van Rensch explains. “For instance during our septennial ‘showing of the relics’, which is the most famous of its kind in the Netherlands.” This ‘showing of the relics’ started in the 14th century as a pilgrimage to the grave of Saint Servatius. It developed into an 11-day-long religious and cultural event with not only processions, but also liturgies, performances, exhibitions and a traditional festival. To attend the next showing of the relics, you will need to have some patience though as it will