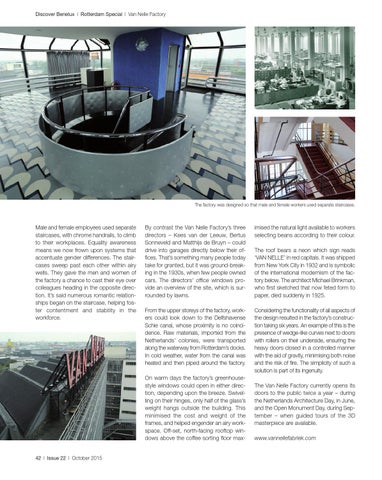 The factory was designed so that male and female workers used separate staircases.

Male and female employees used separate staircases, with chrome handrails, to climb to their workplaces. Equality awareness means we now frown upon systems that accentuate gender differences. The staircases sweep past each other within airy wells. They gave the men and women of the factory a chance to cast their eye over colleagues heading in the opposite direction. It’s said numerous romantic relationships began on the staircase, helping foster contentment and stability in the workforce.

By contrast the Van Nelle Factory’s three directors – Kees van der Leeuw, Bertus Sonneveld and Matthijs de Bruyn – could drive into garages directly below their offices. That’s something many people today take for granted, but it was ground-breaking in the 1930s, when few people owned cars. The directors’ office windows provide an overview of the site, which is surrounded by lawns.

imised the natural light available to workers selecting beans according to their colour.

From the upper storeys of the factory, workers could look down to the Delfshavense Schie canal, whose proximity is no coincidence. Raw materials, imported from the Netherlands’ colonies, were transported along the waterway from Rotterdam’s docks. In cold weather, water from the canal was heated and then piped around the factory.

Considering the functionality of all aspects of the design resulted in the factory’s construction taking six years. An example of this is the presence of wedge-like curves next to doors with rollers on their underside, ensuring the heavy doors closed in a controlled manner with the aid of gravity, minimising both noise and the risk of fire. The simplicity of such a solution is part of its ingenuity.

On warm days the factory’s greenhousestyle windows could open in either direction, depending upon the breeze. Swivelling on their hinges, only half of the glass’s weight hangs outside the building. This minimised the cost and weight of the frames, and helped engender an airy workspace. Off-set, north-facing rooftop windows above the coffee sorting floor max-

The roof bears a neon which sign reads ‘VAN NELLE’ in red capitals. It was shipped from New York City in 1932 and is symbolic of the international modernism of the factory below. The architect Michael Brinkman, who first sketched that now feted form to paper, died suddenly in 1925.

The Van Nelle Factory currently opens its doors to the public twice a year – during the Netherlands Architecture Day, in June, and the Open Monument Day, during September – when guided tours of the 3D masterpiece are available. www.vannellefabriek.com