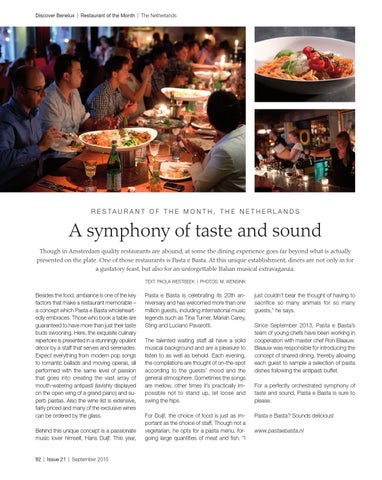 Discover Benelux | Restaurant of the Month | The Netherlands

A symphony of taste and sound Though in Amsterdam quality restaurants are abound, at some the dining experience goes far beyond what is actually presented on the plate. One of those restaurants is Pasta e Basta. At this unique establishment, diners are not only in for a gustatory feast, but also for an unforgettable Italian musical extravaganza. TEXT: PAOLA WESTBEEK | PHOTOS: M. WENSINK

Besides the food, ambiance is one of the key factors that make a restaurant memorable – a concept which Pasta e Basta wholeheartedly embraces. Those who book a table are guaranteed to have more than just their taste buds swooning. Here, the exquisite culinary repertoire is presented in a stunningly opulent décor by a staff that serves and serenades. Expect everything from modern pop songs to romantic ballads and moving operas, all performed with the same level of passion that goes into creating the vast array of mouth-watering antipasti (lavishly displayed on the open wing of a grand piano) and superb pastas. Also the wine list is extensive, fairly priced and many of the exclusive wines can be ordered by the glass. Behind this unique concept is a passionate music lover himself, Hans Duijf. This year,

Pasta e Basta is celebrating its 20th anniversary and has welcomed more than one million guests, including international music legends such as Tina Turner, Mariah Carey, Sting and Luciano Pavarotti. The talented waiting staff all have a solid musical background and are a pleasure to listen to as well as behold. Each evening, the compilations are thought of on-the-spot according to the guests’ mood and the general atmosphere. Sometimes the songs are mellow, other times it’s practically impossible not to stand up, let loose and swing the hips. For Duijf, the choice of food is just as important as the choice of staff. Though not a vegetarian, he opts for a pasta menu, forgoing large quantities of meat and fish. “I

just couldn’t bear the thought of having to sacrifice so many animals for so many guests,” he says. Since September 2013, Pasta e Basta’s team of young chefs have been working in cooperation with master chef Ron Blaauw. Blaauw was responsible for introducing the concept of shared dining, thereby allowing each guest to sample a selection of pasta dishes following the antipasti buffet. For a perfectly orchestrated symphony of taste and sound, Pasta e Basta is sure to please. Pasta e Basta? Sounds delicious! www.pastaebasta.nl