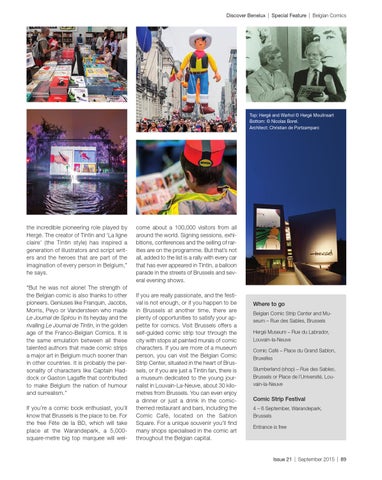 the incredible pioneering role played by Hergé. The creator of Tintin and ‘La ligne claire’ (the Tintin style) has inspired a generation of illustrators and script writers and the heroes that are part of the imagination of every person in Belgium,” he says. “But he was not alone! The strength of the Belgian comic is also thanks to other pioneers. Geniuses like Franquin, Jacobs, Morris, Peyo or Vandersteen who made Le Journal de Spirou in its heyday and the rivalling Le Journal de Tintin, in the golden age of the Franco-Belgian Comics. It is the same emulation between all these talented authors that made comic strips a major art in Belgium much sooner than in other countries. It is probably the personality of characters like Captain Haddock or Gaston Lagaffe that contributed to make Belgium the nation of humour and surrealism.” If you’re a comic book enthusiast, you’ll know that Brussels is the place to be. For the free Fête de la BD, which will take place at the Warandepark, a 5,000square-metre big top marquee will wel-

come about a 100,000 visitors from all around the world. Signing sessions, exhibitions, conferences and the selling of rarities are on the programme. But that’s not all, added to the list is a rally with every car that has ever appeared in Tintin, a balloon parade in the streets of Brussels and several evening shows. If you are really passionate, and the festival is not enough, or if you happen to be in Brussels at another time, there are plenty of opportunities to satisfy your appetite for comics. Visit Brussels offers a self-guided comic strip tour through the city with stops at painted murals of comic characters. If you are more of a museum person, you can visit the Belgian Comic Strip Center, situated in the heart of Brussels, or if you are just a Tintin fan, there is a museum dedicated to the young journalist in Louvain-La-Neuve, about 30 kilometres from Brussels. You can even enjoy a dinner or just a drink in the comicthemed restaurant and bars, including the Comic Café, located on the Sablon Square. For a unique souvenir you’ll find many shops specialised in the comic art throughout the Belgian capital.