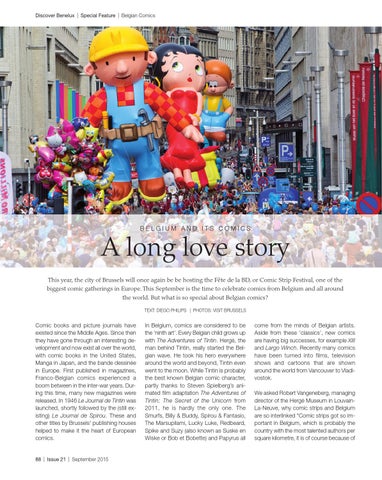 BELGIUM AND ITS COMICS

A long love story This year, the city of Brussels will once again be be hosting the Fête de la BD, or Comic Strip Festival, one of the biggest comic gatherings in Europe. This September is the time to celebrate comics from Belgium and all around the world. But what is so special about Belgian comics? TEXT: DIEGO PHILIPS | PHOTOS: VISIT BRUSSELS

Comic books and picture journals have existed since the Middle Ages. Since then they have gone through an interesting development and now exist all over the world, with comic books in the United States, Manga in Japan, and the bande dessinée in Europe. First published in magazines, Franco-Belgian comics experienced a boom between in the inter-war years. During this time, many new magazines were released. In 1946 Le Journal de Tintin was launched, shortly followed by the (still existing) Le Journal de Spirou. These and other titles by Brussels' publishing houses helped to make it the heart of European comics.

In Belgium, comics are considered to be the ‘ninth art’. Every Belgian child grows up with The Adventures of Tintin. Hergé, the man behind Tintin, really started the Belgian wave. He took his hero everywhere around the world and beyond, Tintin even went to the moon. While Tintin is probably the best known Belgian comic character, partly thanks to Steven Spielberg’s animated film adaptation The Adventures of Tintin: The Secret of the Unicorn from 2011, he is hardly the only one. The Smurfs, Billy & Buddy, Spirou & Fantasio, The Marsupilami, Lucky Luke, Redbeard, Spike and Suzy (also known as Suske en Wiske or Bob et Bobette) and Papyrus all

come from the minds of Belgian artists. Aside from these ‘classics’, new comics are having big successes, for example XIII and Largo Winch. Recently many comics have been turned into films, television shows and cartoons that are shown around the world from Vancouver to Vladivostok. We asked Robert Vangeneberg, managing director of the Hergé Museum in LouvainLa-Neuve, why comic strips and Belgium are so interlinked "Comic strips got so important in Belgium, which is probably the country with the most talented authors per square kilometre, it is of course because of